What is Server Virtualization?

Home / Server / What is Server Virtualization? 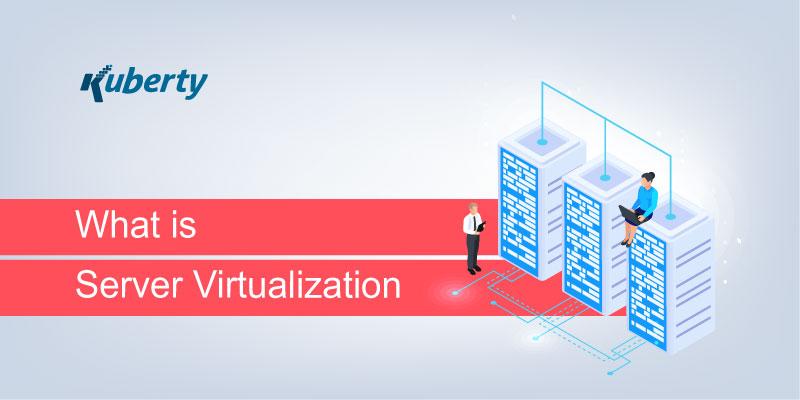 What is Server Virtualization?

A server is a dedicated machine that serves the other systems on the network, called clients. A server has its hardware. But in discharging its server duties, it does not fully utilize the resources. So, it is a waste of resources as a server stands no good for any other purpose.

It is the technique of using the Virtualization software to divide the server and create different standalone machines which run their own operating systems and can be assigned to perform various tasks.

It helps in using the resources in an optimum manner, and all resources are not stuck. Plus, it also separates servers from their users, enhancing security.

It is of three types:

This virtualization takes place with the help of a hypervisor. It is a Virtual Machine Monitor used to divide the physical resources and isolate them from each other. The machine on which it is installed is called a host machine. The hypervisor requires some computing power.

This hypervisor connects with CPU and disk space directly and divides the resources into guest machines. These guest machines run with their independent operating system. For example, you can run one of them on Mac while the other on Linux.

In this case, the entire virtualization process depends on the hypervisor. But using it may slow down your system.

In this model, guest systems are not entirely oblivious of each other’s presence. Instead, they work as a whole unit. Since resource sharing is flexible and systems are aware of each other’s requirement of resources, the workload of the paravirtualization hypervisor reduces a lot. It does not consume as much computing power as required in full virtualization. The systems and hypervisor communicate via hypercells.

3. Virtualization at the OS Level

It is also called a homogenous system. There is no distinct hypervisor required as this capability is in-built in the hosting operating system. In this type of virtualization, guest systems are completely oblivious of each other, and all of them run on the same operating system.

How Does Virtualization Work?

Virtualization is achieved with the help of a hypervisor which lies at the heart of virtualization technology. Usually, hardware has a server application installed, which it uses to accomplish tasks. Hypervisor separates the underlying hardware from the software and divides it into several virtual machines, apportioning between them the required amount of resources. These virtual servers can be allotted a specific task and run on their operating system. The customers enjoy isolation and flexibility.

As you have learned about the different types of virtualization in the earlier part, you can adopt an approach that suits you and your organization best.

Whenever you see a Silicon Valley data center’s picture, all you can see is the large rows of computers. They call them servers. Every organization has such servers where all the data is stored and which serve several other clients.

The first thing that comes to mind is, they must be powerful to do all this work; they must be generating so much heat and don’t even ask about the power consumption.

While these are the characteristics of server hardware, they have compelled software developers and programmers to develop technology that can limit such resource utilization. Server Virtualization is the result, and the following are the benefits that accrue from using it.

When earlier you required ten servers, now you can do the work with two or three machines. You don’t need to invest a large chunk of money in hardware. Server virtualization saves you a large amount.

Earlier administrators were required to allocate large resources to meet demand resulting in server sprawl. And it was justified as you cannot afford to lose users. Now, a single server can be divided into multiple ones, minimizing the over-allocation of resources.

With the number of servers used reduced to a greater level, you need not employ a larger workforce to maintain and administer them. It saves maintenance costs.

You don’t need to pay for a large floor area as the number of servers is reduced to a great extent with the use of server virtualization. Plus, it is a more eco-friendly alternative. Your savings are significant in terms of energy costs.

Your IT staff can perform better when there are lesser systems to take care of. It increases efficiency as the focus is directed towards more important tasks.

These virtual machines are independent of any hardware. So, in case of any mishap, they can be moved to another physical server quickly. Site recovery manager and image-based backups have simplified the recovery.

Setting up several physical servers is very time-consuming and expensive. While setting up virtual machines is simple, easy, and cost-effective.

What is There for an Individual in Server Virtualization?

With the increasing acceptance of advanced technology in organizations, the demand for expert IT personnel is on the rise. Organizations need staff on whom they can shift their burden of installing and managing IT issues, problems and rely on them for cost-effective solutions.

If technology attracts you and you are thinking about a career, server virtualization is a field that offers lucrative opportunities. The different server-virtualization related career options which are available are:

Introduced in the late 90s, organizations did not hesitate in embracing this technology. In recent years, the growth has been unstoppable. And though several new technologies are getting introduced every day, server virtualization is here to stay.

Companies have learned that they are wasting resources, and by accepting new technology, they can save millions. This guide includes every topic related to server virtualization. So go over the advantages, disadvantages, types of virtualization and decide if it is suitable for your business.