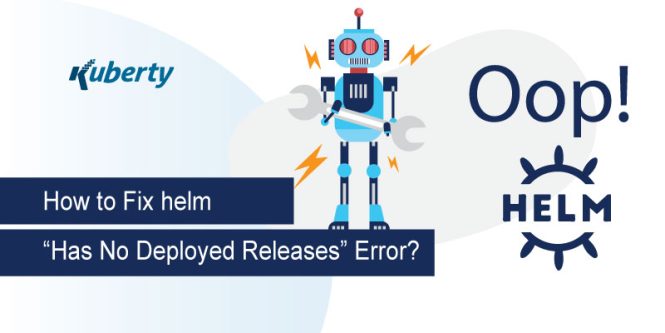 The Helm tool is generally used to manage Kubernetes applications. It serves as the ultimate way to share, find, and use software designed for Kubernetes. It allows in-place upgrades to save the users’ time and effort to the maximum extent. However, it needs to be updated regularly; otherwise, it will not serve its purpose rightfully.

The error stating ‘helm has no deployed releases’ usually occurs whenever an individual tries to initiate helm upgrade –install command on the system. This command is launched to upgrade the helm tool to the newer version. However, sometimes, the command doesn’t execute appropriately, which gives rise to this error.

Helm generally uses the current release as the baseline for the upgrade, and if it doesn’t find the successful deployments, it instantly returns an error message on the screen. Keep in mind that if you run helm upgrade –install command on the previously failed release, then it generates the pop-up stating this error. Therefore, users are advised to take immediate measures and resolve the trouble as early as possible.

If you are looking for the means to solve this specific error and wondering where to start from, you need not worry as we will provide you with a rundown of some of the best troubleshooting methods to fix this issue.

So, without further ado, let’s get started.

A Quick Guide to Resolve helm “has no deployed releases” Error

There are several ways to overcome the “helm has no deployed releases” error. Each of them mainly aims to modify the status of the failed deployment.

We will be discussing the three most popular methods to resolve this error.

Method 1: Delete all failed deployments and start from the scratch

Let’s unfurl the list with the most effective and prominent method to fix the “helm has no deployed releases” error. This method involves deletion of all the failed deployments and initiates the upgrade procedure right from scratch.

As already mentioned, this error mainly occurs when you try to execute the helm upgrade–install command on the failed deployments. Therefore, removing such deployments will surely help you in resolving the trouble.

Carry out the below-mentioned procedure step by step and sort out the issue without creating any fuss.

Another Way to Delete the Failed Deployments

The second most effective method to eliminate the “helm has no deployed releases” error is to change the deployment status manually. This method is all about using commands; therefore, enter them correctly to bypass the issue fuss-free.

To execute this troubleshooting method, it is necessary to follow these steps which will lead to the solution of this issue within little or no time:

Where [release version] is the current version of the release you want to clean and [release name] is the name of that specific release.

Key Fact to Note Down:

Remember that changing the deployment or release status will only resolve the “helm has no deployed releases” error. However, if you are looking to add the missing resources, you must perform the essential manual adjustments.

Also, you need to enter the command appropriately; otherwise, all your efforts will go in vain.

Still facing the ‘helm has no deployed releases’ error on your system even after applying the aforementioned solutions? Then, try out this solution.

Forcing an upgrade is yet another ultimate method to resolve the “helm has no deployed releases” error. It mainly works like the clean-up method in which all previously failed releases are first deleted, and then the upgrade is being carried out. However, it does everything in one single command and, therefore, it is much more effective.

To make the forceful upgrade of the release, all you need to do is follow the steps mentioned below:

Where the [release name] is the name of the particular release that you wish to upgrade forcefully.

Before jumping to the procedure, remember that a forceful upgrade might lead to the loss of certain services. Therefore, it is not suitable for all kinds of releases and you should use this solution with extreme care.

“Helm has no deployed releases” error mainly comes in the scene when the user tries to upgrade the release inappropriately. What exactly gives rise to this issue is the previously failed deployments.

While upgrading the release, Helm 2 compares the current version with the newer one to apply the changes. However, it will not boost your tool if it lacks the essential resources and generates an error. But there are loopholes to everything, and this query is no exception.

To resolve the error manually, you can either opt for a forceful upgrade or delete the previous deployments. However, keep in mind that all methods will eventually change the deployment status and fix the error accordingly.

This guide mainly enables you to upgrade your current deployment to the newer version seamlessly. Select any of the solutions that go well with your system requirements and resolve the issue without seeking any professional assistance.