Methods of Installing Node.js and npm on Ubuntu Server? 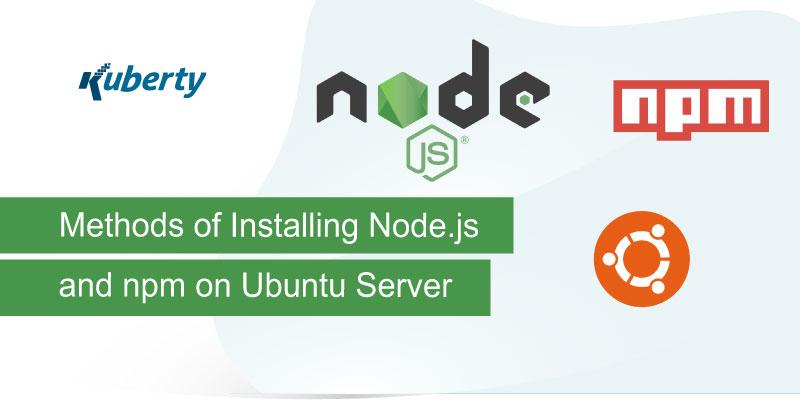 Methods of Installing Node.js and npm on Ubuntu Server?

What can be better than a platform that allows you to run a specific JavaScript code without a web browser? Well, being a reliable JavaScript environment, Node.js does the work decently. This special feature makes Node.js a great choice for JavaScript developers. Besides, the collaboration of Node.js with npm makes JavaScript coding way easier. Needless to say that installing Node.js on Ubuntu offers loads of benefits to Ubuntu users. Especially the latest Ubuntu 18.04 version, which has already been popular among developers and JavaScript writers. Installing Node.js on the latest version of Ubuntu enables the user to utilize the features of the OS in better ways.

However, you need to gather adequate knowledge about Node.js and npm before installing the open-source environment on Ubuntu. Though the process is not that hard, you need to execute the entire process consciously to avoid flaws. Beforehand, let’s discuss Node.js and npm so that you don’t face difficulties while installing these applications as every Ubuntu user is not tech-savvy. So, let’s move on to the next phases of the article.

As you see, Node.js is beneficial from every aspect in terms of JavaScript programming and development. So, we suggest you start using this convenient server-side environment to run your JavaScript programs on Ubuntu.

npm in a Nutshell

Using Node.js becomes way easier because of its official package manager npm. Being the world’s biggest software registry software, consisting of 8 lakh code packages, npm is the best library to date. npm makes it easier and more convenient to install Node.js on Ubuntu. The package installer is easily accessible and that’s why it got a preference from programmers and developers.

Now, let’s jump into the main procedure of installing Node.js and npm on Ubuntu.

How to Install Node.js and npm on Ubuntu?

If you’re using Ubuntu 18.04, make sure you have the access to a non-root account that already has sudo privileges set up. Generally, this set-up isn’t an in-built feature of the Ubuntu OS and you’re likely to set up your server manually.

Conventional Method to Install the Distro-stable Version on Ubuntu system

You may use the apt package manager to get the latest version of the Node.js repository and you need to refresh your local package index by using the following command:

Now, input the following command to install Node.js from the local repository:

Generally, the package available in the repository turns out to be efficient for writing JavaScript by an individual. However, downloading the npm package manager to manage the Node.js repository is a better way. Doing that becomes easier by entering this command:

To ensure that you have installed the correct version of Node.js, use the command:

If you’re satisfied with the version of Node.js that you’ve installed from the Ubuntu repository, start using Node.js with the help of the npm package on your Ubuntu server.

How to Use PPA to Install Node.js and npm in the Ubuntu Server?

Let’s have a close look into the entire process:

Method of Installing Node.js and npm with NVM

Installing Node.js using the nvm tool has been very popular recently. The best thing about the nvm tool is that you get the chance to install the latest version of Node.js and retain the older versions in your system simultaneously. Having the nvm tool installed means that you have a separate independent directory under the main home directory. Go through the following to understand the process in a better way.

So, now you know all about the installation procedure of Node.js and npm on the Ubuntu server. All these methods are vastly used by programmers and developers. Needless to say that Node.js and npm collectively help your Ubuntu system perform different types of programming tasks. Being an excellent server-side environment, Node.js is extremely beneficial and friendly for beginners. If you have stepped into the programming industry recently, there is nothing better than Node.js, and installing this environment on your Ubuntu server makes your user experience way better. So, consider using Node.js and npm on your Ubuntu server following the step-by-step guide mentioned above.