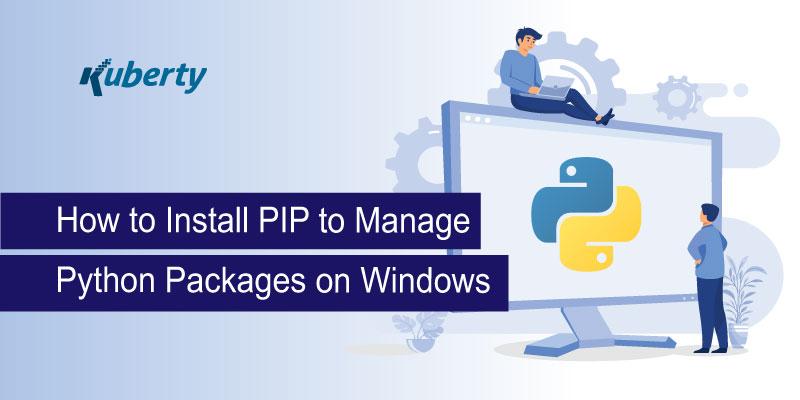 When it comes to managing Python packages on Windows, you need to learn a lot before downloading PIP. PIP, commonly known as Preferred Installer Program, is a Python package installer.

Manually downloading, installing, and managing packages can be time-consuming and irritating. In order to simplify things considerably, many Python developers use a custom tool called PIP for Python (or Python PIP).

Basically, you tell PIP what package you want to install, and it downloads and installs it, so that it can be used by the Python language on your computer. It is important to remember that the programs will still need to import the package in order to use it – PIP ensures that it is ready to import.

PIP is included by default in Python versions 3.4 and above. PIP’s command-line interface (CLI) offers a significant advantage in that it allows Python software packages to be installed seamlessly as if they were a command.

What are Python Packages?

Programmers love Python. It is a swift and simple to use programming language. Python saves a lot of development time with its simple-to-read syntax and easy compilation trait. Python is a typical programming language, which means that it can be used for more than just web development, unlike HTML, CSS, and JavaScript. This includes, among other things, software development and back-end development.

Python’s built-in debugger makes debugging your scripts a breeze. Using Python increases programmers’ productivity and, as a result, the quality of their applications. Python is a widespread preference among data scientists for generating and deploying machine learning applications as well as other scientific computations.

Python is available for Windows, Linux/Unix, and Mac OS, and it has been converted to .NET and Java virtual tools. Python is free of cost even for commercial gains, thanks to an open-source license approved by the OSI.

Python has developed into the ultimate favoured language for data analytics. The increasing search patterns for python also show that Python is the future “Big Thing” and a must for Data Analytics Professionals.

Like any other significant programming language, Python allows third-party libraries and frameworks that you may install to avoid having to repeat history with each new project. If you want to employ them, you may locate them in a central repository known as the Python Package Index (PyPI). Using a Pip, you’ll install the packages from PyPI only.

Prerequisites to Install PIP on Windows:

This particular command will also let you see which version of PIP is installed in your system.

Trust me if you’ve come so far. This is going to be a cakewalk for you.

Congrats on the installation. Now, let us tell you how you can utilize PIP to install a library.

pip install (followed by the name of the library)

And this particular library will be installed in your system in no time.

How to Configure Pip on Windows?

The configuration file on Windows is %APPDATA%\pip\pip.ini.

Using the environment variable ‘PIP_CONFIG_FILE,‘ you can specify a different location for this configuration file.

Now, to upgrade the current version of PIP that you’re using, you’ll again have to follow some easy steps:

This particular command will uninstall the previous command and install the latest version of PIP that is available.

Sometimes, even the latest version cannot be beneficial to you. In that case, you might need a previous version that will go well with your system.

To do this, you’ll have to use the following command in your terminal:

The version number stands for your desired version of PIP. Whichever version you need, just feed in the number, and that is it. You’ll be able to use that particular version after running this command.

That’s all! Now you know how to install Pip to manage Python packages on Windows PC. Well, there are instances when this installation process failed due to a variety of reasons.

In many cases, contacting the package developer is the best answer. Attempting to install in a location where you do not have the authorization to change is a common source of problems. For instance, the default install location may necessitate Administrative capabilities, but Python does not have them by nature. The ideal solution is to install it in a virtual environment.

Native code in some packages requires the installation of a C or C++ compiler. Although package providers should, in principle, publish precompiled versions, they rarely do. You may be able to use some of these packages if you install Build Tools for Visual Studio and select the C++ option. In almost every case, you will need to contact the package’s developer.