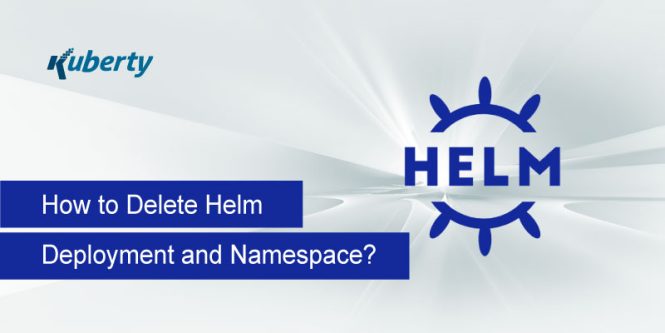 Helm and Namespaces are the two main parts of Kubernetes. Helm is a package manager that enables the operator to deploy applications in Kubernetes. Whereas, Namespace offers a method for specific groups in a single cluster.

Additionally, users mainly face unwanted copies of helm deployment and Namespaces in kubernetes. Thus, it is necessary to clear the space and remove both. But, sometimes deleting helm deployment leaves behind the Namespaces. Which could be a hectic task for users to remove again.

Moreover, it is important to remove the Namespace while deploying the helm.

Helm releases can be deleted and modified to uninstall by using the Helm release uninstall command. The syntax for the same is as follows:

This command searches for the release name and then uninstalls all resources associated with it. For example, they may include the last release of charts or any modification history. It hence frees the storage space for future use.

You can also use the dry run command to stimulate an uninstallation process. The help command can also assist you in case you don’t understand any command. To prevent any related hooks from running along with the uninstallation procedure, you can type the no hooks command.

But before you go on deleting any Helm releases, there are some prerequisites that are mentioned as follows:

What is Helm in Kubernetes?

Kubernetes is an open-source and portable platform for handling the workload and services. Whereas, helm is basically a package manager in Kubernetes. It helps to deploy charts that are mainly packaged applications.

The prime motive of Helm is to pack YAML files. After that, you can distribute them in public or private repositories.

Whenever you think of developing an application, there is a set of pre-designs you need to create. It may include the secret data files, configuration map of the application, stateful set, a couple of services, and many other data packages for the application.

Besides a public repository, the companies can create private repositories. They are made to be shared among the different departments of the company and not with the public.

What is Helm Deployment?

Helm Deployment is the procedure by which you share your Helm charts on public or private repositories. Also, Helm charts are packets of YAML files that can be easily put on Kubernetes clusters.

If Helm charts were not there, uploading individual files would be a hefty task. A Helm chart is a pre-prepared configuration with Kubernetes resources. Moreover, deploying applications to kubernetes is not an easy task. It contains various objects coupled strictly. It additionally demands knowledge of the objects and their functions to a successful deployment.

Once the Helm chart is installed in the Kubernetes cluster, deployment of containerized applications becomes feasible.

Consider the following points that describe the benefits of Helm charts:

Software programmers can utilise the helm charts for the software to deploy the test environment at a single click. For instance, a programmer requires a SQL database, to test a new feature.Rather than installing the software, making the tables and database, they could easily use a single Helm install command for making and setting the database for testing.

Can easily learn the Kubernetes

For an average or beginner developer, it is quite a long task to understand the Kubernetes. Whereas, helm charts assist in learning and simplifies the process for developers to not need the entire and deep understanding of Kubernetes object’s functions for creating and deploying the applications.

No more duplicity and complexity

Helm charts installed in public repositories are reusable. Moreover, the Helm charts are dynamic and can be used in different environments like testing, production, and development platforms. It would help if you made some minor reforms according to the field and version. Then you can reap the omnipotence of your Helm charts.

Helm charts are dynamic to use. You can easily override the values in your template file. If required, you can change the values in the values.YAML file. It allows you to define settings for administrative use. The Helm keeps hold of the different objects in a specific manner. You do not worry about keeping details of each object, and the Helm deploys everything without complexity.

What is the Need to Delete a Helm Deployment?

Helm deployment is quite a complex feature. Thus, there is a chance of mistakes while deploying. For example, if you need to change your default name and add a new name, you may delete your existing file. In addition, there may be multiple copies of the same Helm deployment, so it becomes essential that you delete the copies.

There is a way to delete the Helm deployment, which is discussed ahead. Besides, multiple Helms may exist with the same name but different Namespaces. So, choose the one concerned to you carefully before deleting it.

Find the Helm deployment with your Namespace. You can do so with the help of the following command:

To find the correct Helm, list all the Namespaces. You can use:

To run the uninstallation process, use the following command:

What is a Namespace in Kubernetes?

A namespace is a sub-clusters created under a particular cluster. However, these are distinct from each other and also connected. The resource name should be unique within a namespace but should not be different across namespaces. There is no limit to creating namespaces.

The basic three Namespaces created under the Kubernetes are:

The need for Namespaces arises to divide and control a large software. It becomes very easy for smaller teams to focus on a particular functionality of the software. Besides, there are various benefits of having multiple Namespaces that are as follows:

You can assure that all the Namespaces are getting the required resources by using the policy-driven resource limits on Namespaces. In addition, it prevents the accumulation of all resources by one Namespace.

You can determine the roles that a particular Namespace can behold so that authorized users can get the right unmodified information securely.

You can check on the changes that a particular platform makes in its Namespaces throughout its lifetime. It is what is called freedom to perform operations on a platform. You do not have to bother other users and their Namespaces.

The overall speed of the search engine on the Kubernetes API is enhanced. There would be no latency and buffering at all. In addition, the cluster gets divided into different Namespaces under different project heads.

What is the Need to Delete a Namespace?

If you have deleted a deployment but not the Namespace, all your residing components are still there. So, to completely delete a Namespace, you have to run different commands, including kubectl commands. If the existing Namespace is no longer of use to you and you want to create a better one, you may need to delete the existing one.

How to Delete a Namespace?

Consider the steps given below to delete a Namespace:

Helm is big software with multiple Namespaces and clusters stored in it. It may be possible that there are multiple Helm releases with the same name but different Namespaces. Therefore, it is necessarily important that you identify your Helm. You have to consider and revise before attempting to delete any Helm deployment or Namespace.

Helm is the ideal way to create, share, and find software on Kubernetes. You can use the repository to find a Helm chart for your use. It is available in the Artifacts hub of Kubernetes Packages. They have a collection of more than 2000 packages and 38119 releases.

We hope that through this article you have understood why you may need to delete a helm deployment and Namespace, and also, how you can delete them easily by following just a few steps.