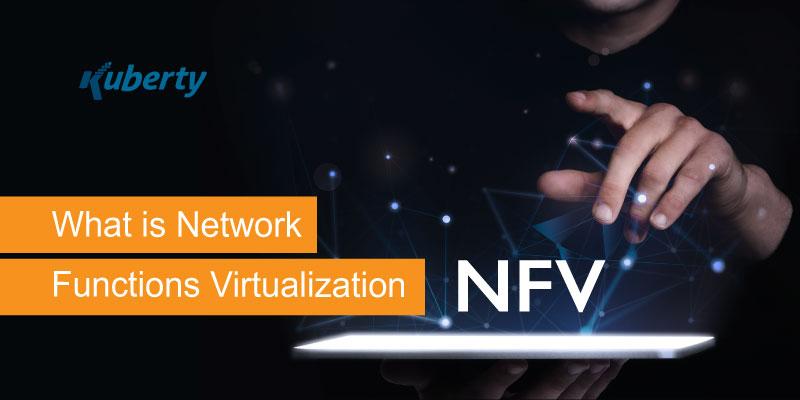 How does Network Functions Virtualization Work?

With Network Functions Virtualization, which is also referred to as NFV, network functions are separated from hardware equipment owned by the user, and they are then run as software in a virtual environment. Virtual network functions or VNF include traffic control, firewalls, virtual routing, etc. The main motive of using Network Functions Virtualization is to support an environment where there are no hardware components.
The standard computer resources, as well as storage and network functionalities, can also be virtualized and used as the hardware. These functions are stored in the commercial off-the-shelf (COTS) that virtual machines can use from the x86 server and access the resources. Let’s discuss Network Functions Virtualization in more detail and its implementation techniques.

If you have virtual resources such as storage, compute, network functions, etc, your virtual machines can access a portion of those resources that you have in the x86 server. Therefore, you can run more than one virtual machine on the same server, and you can also scale to access the other resources. That means you can use more free resources, and you can use the data centres within the virtual environment. You can virtualize the control plane as well as the data plane from the data centre and outside the networks using network functions virtualization.

NFV allows more open-sourced, packet-based networks that are also consolidated, and it is one of the best ways you can reduce the cost for service deployments. In short words, it moves firewall and encryption from the hardware system to your virtual servers by using its decoupling method.
Thus, you will not need to spend much money on expensive hardware equipment, such as switches, servers, storage, etc. for performing network functions. By decoupling different feature sets on a single server, NFV reduces cost as well as time. Even if you want to add new features or functions to the network, you can do that by using a new virtual machine.

For instance, you won’t have to deploy a new hardware component within the network to create encryption. You can easily use encryption software on the standardized server or switch to the network. For network operators, the network virtualization reduces dependencies on dedicated hardware appliances. In that way, it prompts scalability and more scope for customization in the entire network. Network functions virtualization only discharges network functions. While virtualized networks focus on offloading the entire network.

Network function virtualization and software-defined networking might sound similar. But these two have some fundamental differences.

NFV focuses on virtualizing network components. With SDN, network functions like control and forwarding are automated and programmable. NFV virtualizes the network environment, while SDN controls it. Combining NFV and SDN allows you to create a better, highly operated network that you can manage with software.
SDN should consist of a controller, southbound APIs, and northbound APIs. A controller lets you view the network and see how the virtual environment behaves or should behave. Using southbound APIs, you can access information about the network condition from the virtual infrastructure and send it back to the controller. This way, the network can run seamlessly. Through northbound APIs, applications and services communicate with the controller to access resources.

Network functions virtualization was created by service providers who needed to add new functions in the applications but also, at the same time, needed the applications to perform faster. In 2013, the European Telecommunications Standards Institute (ETSI) released the first most NFV standard. But is NFV an open standard?

Is NFV an Open Standard?

Even though the definition and concept of NFV are simple and straightforward, implementing it is not so much. That happens because to get the whole benefits of NFV, you need to learn more about the communications between different network solution providers and operators. Industries like ETSI have invited and allowed more than 130 network operators to join together to create an ESTI Industry Specification Group (ISG). These network operators work together to make NFV an open-standard network platform.

And while you are working with NFV, there are some things—especially its benefits that you need to know.

What are the advantages and disadvantages of NFV?

If the network operators virtualize their network, they can reduce the cost of networking and also reduce the time they need to market their latest products. At the same time, it increases the scaling opportunities and accessing resources needed for applications and services. Let’s have a look at the main benefits of NFV and its disadvantages as well.

The flexibility of work: NFV allows offloading network functions into software that you can run on your organization-based hardware and operate from anywhere within the network. It saves the time that you would otherwise take to deploy and manage your network.

More resources: With a virtualized data centre and environment, you can manage and do more in less time. You can keep data centres, footprints, and more the same way you did before, but it will contain more resources and an increased workload. It happens because a single server can operate more than one virtual machine at the same time, and that’s why you don’t need multiple servers to do the same task. You won’t have to do an additional truck roll to keep the infrastructure updated because you can easily do that from the software. Therefore, you won’t have to update your network and data centres physically each time you have a new update.

Efficiency: Businesses can use the benefits of NFV to keep up with the demands of their market requirements and business opportunities. The organizations that run NFV can adjust to the resource demand faster and effectively when the traffic comes to the data centre—whether or not the demand increases and decreases from time to time. Organizations can scale up and down the number of virtual machines and their resources automatically via the SDN software.

The NFV architecture released by the European Telecommunications Standards Institute (ETSI) is the easiest implementation of the network operation. The NFV allows you to deliver services effectively and faster while meeting the resources demands, and you can also deploy new services efficiently.
By managing networks efficiently, you can improve their performance and improve communications between them. By implementing it, network architects will be able to create new network services effectively. A SDN-based network allows you to manage and program the network functions by separating them.

You can read more about how network functions virtualization works by checking out our other articles, or by commenting below.