Home / Uncategorized / What is a Storage Area Network? 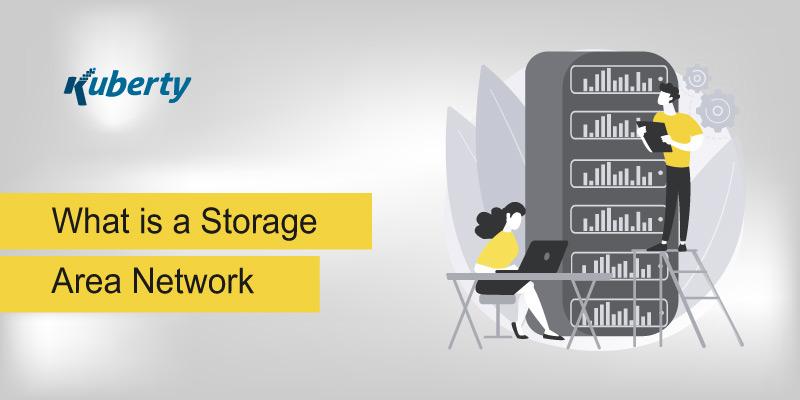 Every computer network that we have heard about has a specific storage area. The old, traditional networks didn’t have any specified destination; rather they were often stored in a scattered manner across different workgroups and organizations. Some of the network storage was found inside the file server while the others were connected directly to the individual file servers. As a result, the whole network storing process turned out to be burdensome and complex. And eventually, the server environment became insecure and impossible to consolidate.

Here comes the notion of Storage Area Network and soon it overwhelmed all these problems by shifting the storage resources and relocating those storage resources into an autonomous, high-performing network. It consolidates the server environment by joining the storage devices and subsystems. The connection is done through several switches and hubs in such a way that it can form a fabric. This decreases redundancy and the storage performance of the network is increased by introducing a fast interface fiber Channel, like 2 Gbps or 4 Gbps. A Storage Area Network provides several storage features, like disk mirroring, data backup or data restoration, data archiving or data retrieval, security, data protection, disaster recovery, and data migration.

The article will give you a brief knowledge about Storage Area Network and its properties. So without further ado let us quickly look at them.

A Storage Area Network or SAN is an independent high-performing block storage network that connects multiple storage devices to different servers and manages structured workloads. The storage area network also shares a group of resources with the servers. It was purposely assembled for heavy workloads that have low latency tolerance and require good performance. A SAN comprises an array of SAN switches, server hosts, storage devices, and cables that can be attached to various computer services via different technologies and protocols. Every switch and storage device that is present on the Storage Area Network must have a connection between them.

The Storage Area Network systems are considered one of the best in the industry because of their ability to manage intensive workloads, high-speed architecture, and varied range of use cases and applications. The usages of Storage Area Network are rapidly increasing among the enterprises to deal with critical business-related applications as it has very low latency and provides good throughput. The deployment of SAN has gained momentum due to its high-performance ratio, low latency, less redundancy, and marginal spinning cost.

A SAN bestows the storage systems to a host in a simple way that the storage seems to be locally assigned and this presentation is achieved by using different types of virtualization. A SAN covers up to 66% of the whole network storage market. Their design makes them resilient and extremely demanding in the market. They are also capable of reducing failures to the storage as well as other components.

The architecture of Storage Area Network

A Storage Area Network is divided into three distinctive layers:

How Does a Storage Area Network Work?

Often regarded as the network behind the computer servers, a Storage Area Network involves a communication infrastructure, which helps to build an any-to-any device to bridge physical connections across the computer network. The connection is done through interrelated components, like switches, hubs, and directors. The concept of SAN is a further extension of the traditional storage bus notion. In SAN, the storage devices and servers are allowed to build a connection between themselves through a Local Area Network (LAN) or Wide Area Network (WAN). The operation of storage elements, computer systems, storage devices, and connections are monitored inside the management layer of a SAN. This layer also guarantees protection and vigorous data transfers.

A SAN typically uses a fiber Channel to connect servers to different storage devices and this connection is made by creating new methods. The methods allow connecting an array of shared storage to different servers and also help them to evade the traditional network traffic. The interconnection is achieved in the following three ways:

Through this interconnection method, several servers can gain access to one single storage device either successively or simultaneously.

A Server-to-Server model is used for multiple servers for internal communication as it provides great speed, minimal latency, and high-end communication.

The main advantage of this method is that it produces maximum ability to transfer data without the intervention of the server or device mirroring. This makes space in the server processor cycle so that it can participate in other activities, like application processing.

Most organizations and workgroups feel that the general computer memory and local area storage are not enough for storing files and providing security and it also decreases the speed and overall performance of the application. So, the organizations acquired the service of Storage Area Network in search of additional storage areas. A SAN can improve an organization in the following ways:

Enhanced Disk Utilization: A SAN along with the network-attached storage (NAS) is well capable of delivering enhanced efficiency and improved data management.

Flexibility: The introduction of SAN brings more stability to the server and it also removes the traditional linking between a file server and storage.

Improved Storage Management: A SAN manages the storage system of the devices by removing the blockage in the bandwidth.

Consistency: The algorithms that are used by a SAN for data protection allow them to provide data consistency and suitability.

Disaster Recovery (DR): A SAN helps to retrieve data in case of a failure in the storage device.

Quick Backup: A SAN makes room for hardware-based copies of data which allows it to back up huge amounts of data in less time.

A Storage Area Network Protocol regulates communication between storage devices and SAN switches. It may use a single protocol or multiple protocols for connections. Several storage devices prefer multiprotocol routers and devices. The accessibility and usability of multiprotocol routers and devices solely depend on the manufacturer. Here are some of the most common Storage Area Network Protocols:

What is a SAN Switch?

A SAN switch is often considered the main constituent of a Storage Area Network. It is hardware that is used for transferring storage traffic between servers and storage pools. A switch creates a Storage Area Network by joining numerous host servers that comprise storage devices and servers. Some SAN switches act as separate devices to create a SAN fabric while the rest of the switches are used to create a superior SAN fabric. A SAN switch enhances the number of potential connections in a storage network. A Host Bus Adapter card (HBA) is used by the fiber Channel to make a connection between the switches and the file servers.

How to Initiate a Storage Area Network?

The process of implementing a SAN is slightly different from other networks. Follow the below-mentioned steps to initiate the services of a Storage Area Network.

Step 1: Separately connect the storage devices among themselves so that it looks like a shared storage pool.

Step 2: In the middle of the computer server and the storage pool, add a fiber switch.

Step 3: Take a fiber cable and join every device with the fiber switch.

Step 4: Then again using those fiber cables, join all the computer servers with a fiber switch.

The advantages of a Storage Area Network are:

The disadvantages of a Storage Area Network are:

SANs are often deployed by modern enterprises to gain maximum benefit and generate high-performing applications. The applications of a Storage Area Network are:

The technologies of the Storage Area Network are widely available in the market for storage and data management purposes. It operates and creates an interface for the client servers, storage devices, and data storage pools. It also ports the storage devices, cables, and switches. The SAN software is also able to manage the components, host servers, and interconnected devices that are present in the software area network. SANs also regulate the mapping services of numerous devices and switches. It also controls the partition for logical SAN. Nowadays, the technologies of SAN are used in almost every office and organization.

This article gives detailed information about the software area network, how it works, its advantages, and disadvantages. Considering all the major factors about SAN, this storage networking system can be very helpful for enterprise resource scheduling and to meet the workloads of the client.