Comparative Analysis of Cassandra and MongoDB 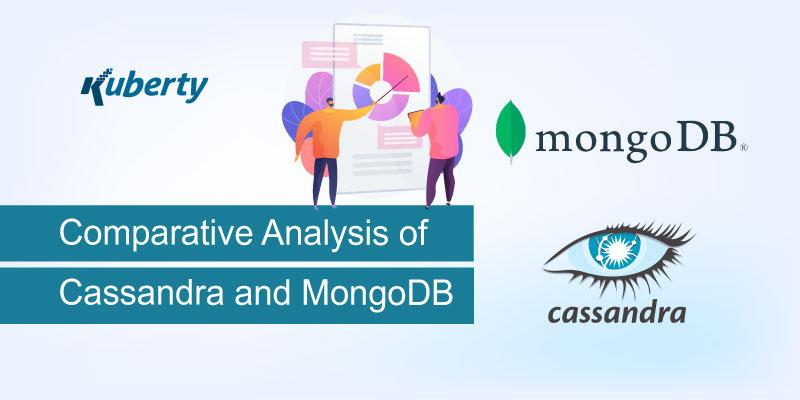 Comparative Analysis of Cassandra and MongoDB

You must have undoubtedly come across Apache Cassandra and MongoDB if you are looking for a robust NoSQL database. These two popular NoSQL options have a lot less in common than you may think. They are both NoSQL databases that provide companies with dependable scalability for modern data requirements. Launched in succession, Cassandra was created in 2008, while MongoDB came a year later. Both are open-source and have a substantial support community.

This is where the similarities between the two NoSQL databases end. This blog is a detailed comparison of Cassandra vs MongoDB, as well as how the two databases vary from each other. We’ll start from the basics and then learn the major differences between them.

NoSQL is an approach to database management that can handle lots of data models, such as key-values, documents, binary, and graph models. These databases are non-relational, decentralized, flexible, and scalable databases. Several NoSQL database systems can be found as open-source software.

Originally, the name NoSQL could be interpreted literally, meaning that SQL was not utilized as the data access API. However, due to SQL’s widespread use and utility, several NoSQL databases have included SQL functionality. The acronym NoSQL, which stands for “Not Only SQL”, is now widely recognized.

Have a look at some of the advantages of using NoSQL databases:

What is Apache Cassandra?

Apache Cassandra (or just Cassandra) is an open-source and distributed NoSQL database that originated as a Facebook internal project, but in 2008 got published as an open-source project. Cassandra provides modern applications with accessibility (zero downtime), higher performance, and linear scaling, along with operational simplicity and easy replication across data centers and countries.

Cassandra can manage petabytes of data and thousands of simultaneous operations per second, allowing businesses to manage huge volumes of data in hybrid and multi-cloud settings.

Cassandra’s popularity stems from its impressive technological capabilities. Salient features of Cassandra include:

Elastic scalability: Cassandra is extremely scalable, allowing for the addition of more hardware to handle more people and data as needed.

Always on architecture: The majority of traditional databases feature a primary / secondary architecture. In these configurations, a single primary replica performs read and write operations, while secondary replicas are only able to perform read operations. Downsides to this architecture include increased latency, as well as higher costs and lower availability at scale. In Cassandra, no single node is in charge of replicating data across a cluster. Instead, every node is capable of performing all the read-and-write operations. This improves performance and adds resiliency to the database.

Fast linear-scale performance: Cassandra offers linear scalability, which means that as the number of nodes in the cluster grows, so does the capacity. As a result, it maintains a rapid response time.

Flexible data storage: Cassandra supports a wide range of data types, including structured, semi-structured, and unstructured data. It can dynamically adapt to changes in the data structures based on the requirements.

Scalability: Expanding applications in conventional setups is a time-consuming and expensive operation that is generally performed by scaling vertically. Cassandra enables the simple addition of extra nodes to the cluster. This increases the capacity to the next level. For example, if four nodes can manage 200,000 transactions per second, then eight nodes can handle 400,000 transactions per second.

Fast writes: Cassandra was built from the ground up to run on low-cost commodity hardware. It has lightning-fast write speeds and can store hundreds of terabytes of data without compromising read speed.

MongoDB is a free, open-source, and document-oriented database that can hold a vast amount of data and allow you to deal with it quickly. Because MongoDB does not store or retrieve data in the form of tables, it is classified as a NoSQL (Not Only SQL) database.

It was originally developed and managed by MongoDB.Inc, which was first published in February 2009 under the SSPL (Server Side Public License). It also includes certified driver compatibility for all common programming languages, including C, C++, C#, and others. Net, Go, Java, Node.js, Perl, PHP, Python, Motor, Ruby, Scala, Swift, and Mongoid are all examples of programming languages. As a result, any of these languages may be used to construct applications.

Document Oriented: MongoDB stores all data in documents rather than tables. In these documents, data is kept in fields (key-value pairs) rather than rows and columns, making the data considerably more flexible than in relational database management systems. Also, each document has its unique object ID for ease of identification.

Indexing: Each field in the document gets indexed with main and secondary indexes in the MongoDB database, making it much simpler and quicker to obtain or search data from the plethora of data.

Scalability: MongoDB uses sharding to achieve horizontal scalability. Sharding refers to the distribution of data over several servers. In this case, a significant quantity of data gets partitioned into data chunks using the shard key, and these data pieces are uniformly distributed among shards that span multiple physical servers. It may also be used to add additional machines to an existing database.

Replication: MongoDB enables high availability and resilience by creating several backups of the data and sending these to separate servers. This ensures that if one server fails, the data can be recovered from another.

Aggregation: It enables you to execute operations on grouped data and obtain a single or calculated result. It’s equivalent to the GROUPBY clause in SQL. Aggregation pipelines, map-reduce functions, and single-purpose aggregation methods are among the three types of aggregations available in MongoDB.

High Performance: Due to characteristics such as scalability, indexing, and replication, MongoDB has a very high speed and data permanence as compared to other databases.

In terms of data storage, Cassandra is more similar to relational databases. It’s a table-based, column-oriented database that enables users to build columns and tables on the fly. Furthermore, Cassandra doesn’t require identical columns in every row. The primary key is used to get data from a tabular database.

MongoDB, on the other side, is an object-oriented database. The data is stored using BSON (Binary JSON) and supports a wide range of object structures, including nested object structures. MongoDB is significantly more versatile than Cassandra since it doesn’t require a schema. If necessary, you can construct a schema in MongoDB.

When comparing Cassandra vs MongoDB, it’s worth noting that Cassandra has a cluster that can support master nodes. The multiplicity master nodes are a unique characteristic that allows another node to take over when one node fails. This eventually makes the clusters keep on running and available at all times.

Cassandra supports many master nodes, substantially improving write scalability. In a cluster, users can define the number of nodes as desired. The more nodes a system will have, the more scalable that database becomes.

Whereas, there’s only one master node allowed in MongoDB. Slave nodes make up the rest of a cluster. You can only read data from the slave nodes while data is being written to the master node. MongoDB is not as scalable as Cassandra because of its master-slave design. Sharding methods, on the other hand, can increase MongoDB’s scalability. These may, however, need a proper setup.

You can write to a cluster even if a node fails since Cassandra supports multiple master nodes. Because MongoDB only allows for a single master, you may have to wait 10 to 40 seconds for write operations if a node fails. In terms of scalability, Cassandra outperforms MongoDB.

Aggregation enables the execution of complicated queries. There is no aggregating mechanism in Cassandra. For aggregation, administrators must utilize third-party technologies like Hadoop and Spark.

MongoDB, on the other hand, includes a built-in aggregation mechanism. It can combine stored data and provide results via an ETL (Extract, Transform, Load) pipeline. However, the database’s built-in aggregation is only effective for modest traffic and the aggregated architecture grows more complicated as you scale.

MongoDB completely supports secondary indexes, which can help improve query processing. Any property of an object, even nested objects, can be queried very rapidly.

When it comes to the schema, you must choose whether you want a flexible database or a stationary database.

MongoDB is a database that doesn’t require a schema, which makes it inherently more flexible. The default setup in previous versions did not impose any schema at all. You may now choose whether or not you want a schema. Because of this versatility, the database may accept documents with various formats and then interpret them in the program. That makes MongoDB a flexible database.

On the other side, Cassandra is a database that is considerably more stationary. It allows individuals for static typing while still requiring the classification and specification of columns ahead of time.

The performance of both Cassandra and MongoDB gets influenced by a variety of things. The database model (or schema) makes a significant difference in performance quality since some are better suited to MongoDB and others to Cassandra.

Furthermore, the load characteristics of the application that your database must serve are critical. Cassandra, with its many master nodes, will perform better if you expect a lot of data. Both MongoDB and Cassandra will function well in case of heavy load output.

When it comes to consistency needs, many people believe MongoDB has the upper hand. But it varies depending on the type of application. You may also manually configure Cassandra to suit your consistency requirements.

NoSQL is an approach to database management that can handle lots of data models. Often found as open-source software, these databases are non-relational, decentralized, flexible, and scalable. Two of the most popular NoSQL databases Cassandra and MongoDB, which are widely used by larger global players, have lots of different things to offer.

While Apache Cassandra is an open-source and distributed NoSQL database, MongoDB is a free, open-source, and document-oriented NoSQL database that is capable of storing and processing large amounts of data quickly. The blog outlines all the main differences and details about them along with covering all the features from the grass-roots level.