How to Uninstall or Remove Software Packages From Ubuntu?

Home / Software / How to Uninstall or Remove Software Packages From Ubuntu? 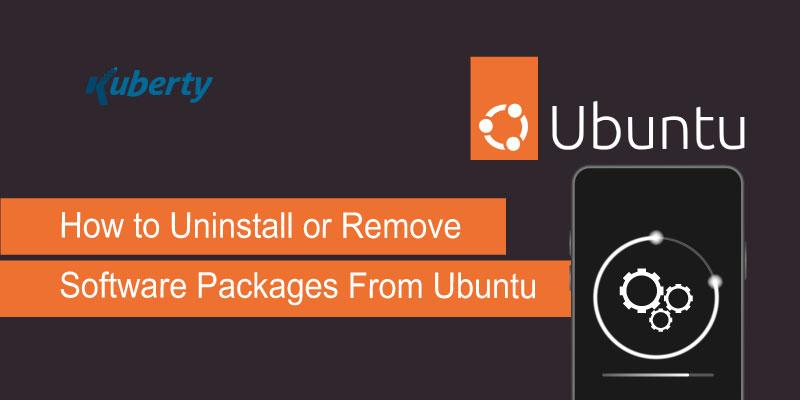 How to Uninstall or Remove Software Packages From Ubuntu?

Most users install new and interesting software packages on their systems. But after trying them for a few days they decide that they are not what you were looking for. But while removing applications from Windows and Mac devices look easy, it is not as easy in an Ubuntu system. However, uninstalling or removing software packages from your Ubuntu system is a cakewalk if you learn a few commands. In this article, we are going to talk about several ways that can help you remove a software package from your Ubuntu Linux computer. This guide can be followed if you have access to the command line tool on Ubuntu and can use the GUI (graphical user interface) built in.

You can remove a software package using the graphical “Ubuntu Software Center” and with the apt or apt-get commands on your command line. But to do that, you need to make sure that you meet the requirements for deleting apps on Ubuntu. Here are the prerequisites to look out for:

Having checked the above points, let’s move on to the most popular methods for removing software packages from Ubuntu.

You don’t have to use the command-line tool if you don’t want to. Instead, the Ubuntu Software Center (USC) allows you to uninstall applications as well as install them. The software manager is a common tool for Ubuntu users who use the graphical interface. Installable programs can be found here. Once you have installed those programs, you can access them and uninstall them directly from the Ubuntu Software Center. Take a look at the steps below:

Step 1: Search for the Ubuntu Software in the Activities screen.

Step 2: Click on the orange icon and it will launch the tool

Step 3: Click on the “Installed” tab inside the tool to find all the installed applications on your system. The tab can be found at the top. There will be three choices: All, Installed, and Updates. The Installed option must be selected.

Step 4: The window will list all the apps you have installed. Scroll down until you find the one you want to uninstall. And then click on “Remove” next to that app.

The application will ask you for a confirmation and you will have to confirm the process by clicking on the Remove option. You will be asked for your password to authorize the process. Once you click on that button, your application will be gone forever from your system until you reinstall it.

This is the simplest way to remove an application from Ubuntu. Scroll down to find other solutions.

Uninstall With the Command Line

You can uninstall applications using the command line. Additionally, the command-line tool offers more options for managing your software packages than GUI tools do. Here’s how to remove an application from your command line:

Step 3: The command prompt will list out all the installed packages on your computer. You can sort out the results to less to read the list easier or filter the results with grep: sudo apt –l | less

Step 4: In both Ubuntu and Debian computers, you can uninstall or install, and update applications with the apt and apt-get command.

Step 6: You can also delete more than one package and each of the names should be separated with space: sudo apt remove package1 package2

Step 7: Even though the remove command uninstalls the packages, in many cases they leave behind some of their files. But you can use purge instead of remove: sudo apt purge package_name to remove their associated files.

Alternatively, you can try another command if these do not work.

Many Linux distros use the Dpkg (Debian Package) manager as their default software management system. So, you can use the dpkg command to uninstall the software package but you need to know the right name of the package that you want to remove. You can enter this command on the terminal and it will show you all the installed packages:

Since it shows a lot of names in a list, it might be hard to read. Using this command will help you read the list further:

You can search for the particular software package with this command by replacing the package_name with the name of the software you are uninstalling:

If you don’t know the full name of the software, try to specify the part of the name with the * (asterisks) symbols:

Use the AutoRemove Command

The Apt commands can remove unnecessary software dependencies with the sudo apt-get autoremove command. If there are any failed installation files or corrupted software packages, use the apt command repair tool to remove them with this command:

With this command, apt will scan all the installation files on your system and if it finds a broken one, it will remove those corrupted files.

Now, you know how to Uninstall or Remove Software Packages From Ubuntu by using different methods. Sure, there are some commands that you need to use accurately. But if you can’t use the commands, use the Ubuntu Software Manager instead. If you are running the Ubuntu Graphics User Interface, the software manager will be there by default. If not, the command line is your best option. Since you can remove the software package using multiple commands, you won’t have any trouble doing so either.

Even though the GUI command method is easy to use, we would recommend you to stick with the command-line tool. The apt package manager in Ubuntu is one of the best tools for managing system dependencies. Therefore, the command-line tool is the best method to manage all the software packages. In the comment section below, please let us know if you need any assistance or if you have a question regarding uninstalling or removing software packages from Ubuntu.