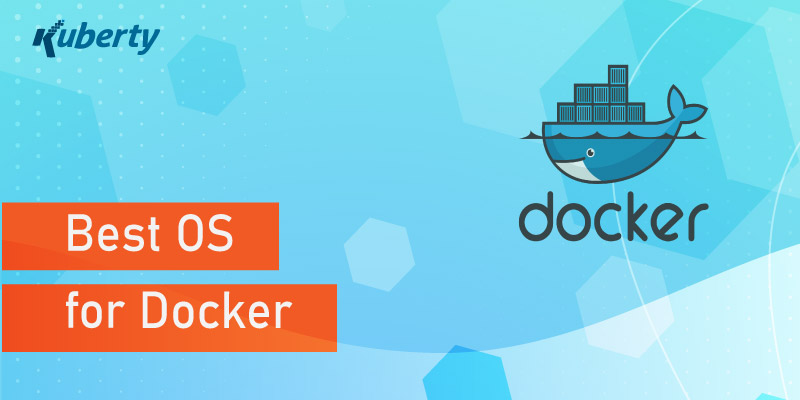 Every enterprise, whether small or large, all has been adopting Docker for better productivity. Docker is not a very old concept in the market but is gaining momentum faster than any other technology.

Docker offers several advantages when it is integrated with containerized and cloud architecture. The containerization platform not only helps in the software development process but also in the deployment. You can create, test, and deploy large applications using Docker. It helps in team collaboration and saves a significant chunk of time and effort.

There are several common questions regarding Docker, and one such is,

What OS should you use for Docker?

Well, there are various options that you can consider as the operating system for Docker. It is essential that Docker can be easily installed and run on the operating system for the containers to work efficiently. Before getting into the different OS options for Docker, we will dive into a brief discussion about Docker and how it is different from the virtual machine.

Docker came into the limelight in 2013. It was developed by a group of active developers. Since then, it has come a long way. Over its run, Docker has benefited many organizations consistently.

Once you implement the Docker technology with your DevOps pipeline, you will understand how the development and deployment process can be done efficiently. Docker helps you create complicated applications with great ease by packing them in containers, which can be deployed on any platform.

Docker has eliminated the need to focus on the underlying infrastructure or host where the container will run. It also solves the vendor lock-in problem, where vendors are stuck with one (cloud) provider for specific services.

With Docker, you can run containers anywhere, either on cloud or on-premises, without relying on the underlying system specifications. It ensures container portability that makes containers easily transferable from one platform to another.

Docker has broad community support and is an open platform where developers can contribute to the advancement of Docker by adding new features. You can even make changes to the public image repository (Docker Hub) and push the modified version.

Docker Container vs VM: How is Docker different from a Virtual Machine?

In the case of a vm, you need dedicated infrastructure and resources used by an instance of the virtual machine, which creates a significant resource overhead. But Docker does not require individual resources for running containerized applications.

With Docker, there is no need to change the system configuration every time you run and deploy any application. Docker comes with Docker Compose that provides an environment for various containers and links each application into a single package and its dependencies. You can scale the package efficiently by creating the overhead.

How to Decide the Best Operating system for Docker?

Below are some criteria that will help you choose the right operating system for running Docker as per your business requirements:

Once you finalize your requirements, you can choose the right operating system from the 6 best options explained up ahead.

Well, there is no doubt about the immense benefits provided by Docker. But the main concern here is what OS should we prefer and use for leveraging the benefits of Docker. Below is a list of the 6 best-operating systems for Docker available right now:

CoreOS works in conjunction with Linux CoreOS, which is a next-generation, single-purpose container OS technology. The same team developed it as the Atomic host. CoreOS comes with the features of RHEL, including the automated and remote upgrade feature from Container Linux.

RHCOS (Red Hat Enterprise Linux CoreOS) is a default OS for cluster machines that allows you to create compute machines or worker machines.

RancherOS provides you the easiest way to run Docker in the production environment. Each process in a RancherOS is a container that is managed by Docker. RancherOS is comparatively smaller than other available operating systems and has only the necessary services to run Docker.

There are no unnecessary libraries and services in RancherOS, thus reducing unnecessary security patches and other system maintenance requirements. This is because Docker includes every library and service within the container.

Project Atomic is considered to be an umbrella for various projects to re-design the OS on the principle of immutable infrastructure. A Linux distribution is built on the design principle of the distributed system with consistency and scalability as the primary concerns. It comes with an immutable file system.

Snappy is the latest technology that is implemented in the Ubuntu Core. Ubuntu Core provides the minimal rootfs for creating customized images for your specific business needs.

It offers a minimal and suitable environment for Board support packages, constrained or integrated environments, or Linux containers.

You can use Alpine Linux as the underlying OS for many official Docker images. It is small in size and is different from the full-fat Linux distributions, which compete with Solaris.

This OS runs on embedded systems, requiring minimal resources, making it perfect for Docker containers. Alpine Linux is mainly designed for and used by hackers. Alpine’s system libraries are well-suited for small, fast, and secure deployments.

With Alpine, the Docker community will be able to create significantly smaller containers.

Mesosphere DCOS offers a very robust and innovative way of managing Docker containers. It bundles together the Apache Mesos, Marathon, ZooKeeper, and other services to keep the enterprise-use on the top. It comes in 2 editions:

In the above article, we have discussed how to choose the right operating system for running Docker. Once you understand your business requirements, for what purpose you want to use the Docker, and which OS offers that functionality, it will be easier to choose the most suitable OS to run Docker.

We have also mentioned 6 of the most popular OSs that come with full-fledged Docker support and allow some standard and exclusive features, tools, and technologies for Docker.