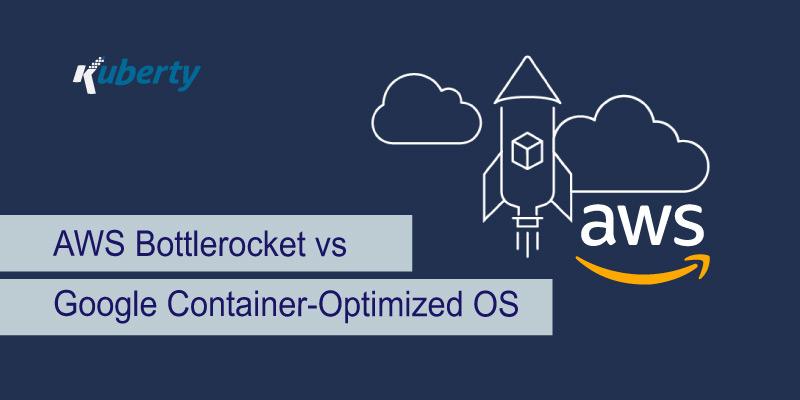 The concept of containerization is not new but has gained much popularity in recent times due to the immense benefits offered by it. Most companies are now focusing on running their applications as containers using commonly used container platforms.

Today, we have got various container technologies like Docker, Kubernetes, and many best practices to implement. These technologies help to containerize different types of applications. Many big companies like Amazon and Google are now focusing on container technology that can be used by other organizations for adopting and using the containers. This technology will help in leveraging the benefits of containers for increasing portability and enhancing efficiency.

AWS bottle rocket is a Linux-based operating system that is designed majorly for running the containers on various virtual machines or bare-metal hosts.

In the below article, we will highlight the difference between the AWS Bottlerocket and the Google container-optimized OS.

What is AWS Bottlerocket?

AWS bottle rocket was introduced as an open-source, Linux distribution that is much similar to Google’s container-optimized operating system option. It is a single-step update process, helping in reducing the overhead due to the management of containers. Currently, the AWS bottle rocket OS is in its developer preview phase which is ready to be tested as Amazon Machine Image for EC2.

It supports Docker images as well as images that conform to the open container image format, enabling it to run all Linux-based containers. One of the key features of Bottlerocket is that it comes with a package-based update system. The model uses an image-based approach for efficient and faster updates. Bottlerocket is supported for three years by AWS and is primarily designed for AWS. On GitHub, you can find its source code.

What are the benefits of using Bottlerocket?

Below are the main benefits that are offered by the AWS Bottlerocket operating system.

What are the core components of Bottlerocket?

Below, we have mentioned the primary components of Bottlerocket:

What is Google Container-Optimized OS?

The container-optimized OS helps the developers to speed up the process of running the higher throughput workloads ensuring better security and uptime of the system. By running AWS on Bottlerocket, customers can leverage the benefits of the increased scaling.

What is its features and benefits?

These Google-container-optimized operating systems come with the limitations listed below.

Use cases for Container-Optimized OS

You can use the containerized OS for running the Docker containers. It can also be used for compute engine instances if you meet the following requirements-

But, Google container-optimized OS does not work all the time and is not suitable in the following cases-

Challenges with a host OS

Running a container will definitely require an operating system. Some of the containers can be run on the general OS, as container-based host environments support running thousands of containers, making it easy to scale. Such scalability may cause various problems like overhead, updates failure, and security attacks, etc. and as a solution, Bottlerocket and Google container-optimized OS comes into the picture.

This OS helps in enhancing the speed and efficiency for running the workloads ensuring better uptime and security. Using Google’s computer engine, you can deploy containers on Google cloud. Additionally, you can run the containers in a familiar virtual machine environment.

Using the GCE VM, you will be able to specify the image you want to use from the container section. In the boot section of the Docker container, you can select an OS optimized for running containers. While with the Bottlerocket, you can host your containers in Amazon infrastructure.

On the other hand, Google container-optimized OS achieves this by moving all the required services and applications out of the OS system/userspace within a container. Apart from this, you can enable its auto-upgrading feature by default. It will keep the nodes updated in the cluster as per the cluster master version. In this way, both OS will help in improving the security and reducing the overhead due to maintenance.

AWS Bottlerocket simplifies the development process for developers and makes them more involved by using GitHub as their platform of choice. This enables the end-users to create operating systems with their own features.