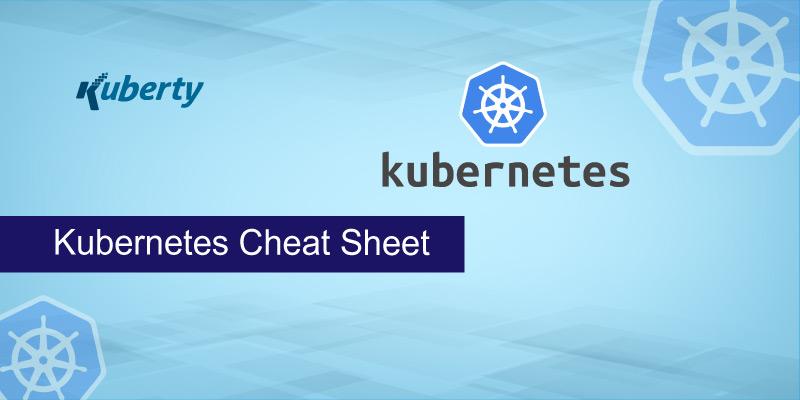 Containerization is the best-in-class strategy for deploying and working with software on a large scale. It is a modern way of processing software or applications that run easily in new computing environments. However, these containers need to be managed and processed, and that is the main motive of container management systems. Kubernetes is quite possibly the most notable and widely-used container management system out there.

In this Kubernetes cheat sheet, we will learn in detail about Kubernetes, its benefits, architecture, along with all the basic yet important Kubectl commands for achieving various tasks in Kubernetes.

This is exactly where Kubernetes comes into play. It is an open-source container orchestration platform that helps companies to execute their distributed systems smoothly. Time-taking processes such as application scaling, managing downtimes, aligning resources, providing deployment patterns, etc. are automatically managed by Kubernetes. It helps you in the following ways:

The architecture of Kubernetes is made up of a control plane which is also known as master, an etcd which is the distributed storage system responsible for consistent functioning, and tons of cluster nodes or Kubelets.

In one environment, the default setup offers only one master node that is the point of contact for all the worker nodes. However, you can have multiple master nodes in case of high demand. Following are some of the frequently-used terms associated with Kubernetes architecture:

An individual will have the full liberty to use either the complete word mentioned in the command or the shortcode variation mentioned along with the heading of each section. The outcome will be the same.

It is the process of managing multiple Kubernetes clusters under one organization. Clusters used for development, testing, and production are aligned with a single infrastructure. The whole management work is done by using the below-mentioned codes.

Events are typically used for discovery purposes and are automatically created every time resources get changed, face some issues, etc. that are important for administrators and employers to know.

A lot of virtual clusters get supported by one physical cluster. All of these virtual clusters are termed namespaces that are used by various environments and users across multiple teams and projects.

Every pod under the Kubernetes environment runs on nodes which is basically a worker machine that can be virtual or physical based on the cluster. Nodes are handled by managers.

The most basic deployment unit in Kubernetes is Pods. They are responsible for running instances under clusters and a single Pod can be composed of a few containers.

In Kubernetes, Service is used for defining a logical set of Pods and policies through which one can access the Pods. The pattern defined is often referred to as micro-service.

Consider logs as updates in the form of notifications that help individuals to stay updated regarding all the things happening in an application. They are useful for identifying issues, updates, etc in the first place.

Daemonset enables a few or every node to run the copy of Pods. Right after the addition of a node in a cluster, Pods will be added to the same. Similarly, on the removal, the Pod will also be removed.

9. Displaying the State of Resources

For getting detailed information regarding any resources, make the use of kubectl describe command. All the uninitialized resources will also be listed by running this command.

For applying and updating resources, the kubectl apply command is used by taking files or stdin as inputs.

To have a better vision about implementing the aforementioned Kubernetes cheat sheet more effectively, it would be better for you to learn about Kubernetes components. The functioning of Kubernetes is possible because of its clusters. These clusters are composed of worker machines known as nodes for running the applications through containers. These nodes further host pods that are the most basic and integral component of application workloads.

All of these nodes and pods functioning under one Kubernetes environment are managed by the control plane. This control plane functions on various computer devices under one infrastructure that eventually ensures the availability of the containers and fault management.

Components of the Control Plane

The main decision-maker under the Kubernetes environment is the control plane, which is responsible for modifying the functioning of the cluster, keeping up with the events associated with clusters, etc. Following are the integral components of the same:

Components of the Node

Components of a node are available at every node running under a Kubernetes environment. They are typically responsible for running all the pods and therefore, providing Kubernetes runtime infrastructure.

Kubernetes is an open-source container orchestration platform that facilitates the management of distributed systems. The architecture of Kubernetes is made up of a control plane that is also known as master, an etcd that is the distributed storage system responsible for consistent functioning, and tons of cluster nodes or Kubelets.

The blog contains a Kubernetes cheat sheet that is a set of all the important and frequently-used Kubectl commands. They help in making the communication with the Kubernetes API server possible.