Home / Python / How to Use Comments in Python 3? 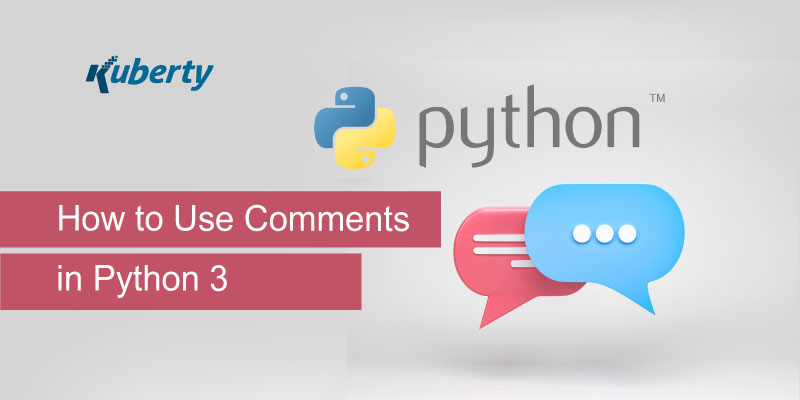 It happens with every programmer, be it an expert or a novice, that you need to go back to the code you wrote and make changes in it. When you are writing a small code, for example, adding two numbers, the program is a child’s play. You can do it with the snap of a finger. But what about a complex program on which your entire team is working day and night? What if you need to go over the entire code? It looks like nothing but a mess.

Many people have worked on the code and you can’t understand why the programmer wrote it. In such a situation, comments come to your aid. These are small explanations that tell everyone why a code is written in a particular way, and what does it signify. Making comments while writing the code or immediately after writing the program can be very helpful as what you wrote is still fresh in your mind.

Python is a programming language that has gained popularity among programmers and many programs have been written using it. It is a language that is simple and thus programmers use it on a large scale, thus, the question always arises as to how to use comments in Python 3.

In this blog, we will discuss various kinds of comments that you can use in Python 3. So hop on.

Why Writing Comments in Python 3 is Important?

You don’t execute a comment. It is not part of a program. You can take it as a backend thing that is meant for human use and not for computers to read it and execute it. A comment is not deployed when a program is written.

So, in a simple program, it will look like this:

# for loop that iterates over water list and prints

for water in waters

Remember, a comment is indented in the same way as the code for which it is written. To understand the indentation, you can go over the again function in this Calculator Program.

Do you want to use the program again?

Please choose between Y/N for Yes and No.

# If user types Y, use the program again

# If user types N, Exit the program after saying goodbye to user

# If user types another key, run the function again

You must understand the essentials and importance of a comment to maintain its worth. It is not just the creator of the program, who uses the comment, but others as well. If you don’t use it in alignment with the code, there is no point in writing it as it will only cause more confusion. The comment is supposed to be simple and not an explanatory one describing what and how of the code but an answer to a simple ‘why’.

These comments are used when the code is not a regular one but a complicated one that needs a good comment. The indentation and syntax rules are the same for block comments as well.

As they are long comments, you need to write each line starting with a hash mark. In case of more than one paragraph, separate it by a line.

You can go over this example of a block comment explaining the main () function.

# The main function will parse arguments via the parser variable. The

# use will define the arguments. This will forward the word arguments and

# the filename user wants to use, and in case of wrong argument

# it will pop up the text file.

help=”look for this word in the file.”

help=”the path to the text file to be searched through”

When you are writing complex code, block comments can be very useful but that doesn’t allow you to stuff the code with comments. Leave room for other programmers to understand it. Write only what is necessary.

When your comment is written in the same line as the concerned code, it is called an inline comment. It also follows the syntax and looks like this:

When you are writing a lengthy program and a complex one on top of that, in such a case, you need inline comments to explain the difficult or tricky parts. If you think this line of code is important and you will need to go over it in the future, or if you want to highlight it for your team, this comment will come in handy.

For example, if you have written a program that does not contain anything about a complex number but a line of code returns a complex number, you can highlight it by an inline comment for your team members.

You can insert it as an explanation or additional information as to why you did that.

Use the inline comments after carefully thinking.

You can use comments to resolve this. The comments can help you decide between loops as well as a while loop and for a loop.

Here’s an example to understand it:

print(‘You have guessed the correct number!’)

print(‘You did not guess the correct number. It is ‘ + str(number))

It is a simple way of finding out the problem section in your program.

Coding is fun. Writing programs is amazing. Being a programmer, you invest hours in writing every single function, action, and instruction of a program. Any problem in any part of the program cannot be tolerated. Thus, it is essential to check every line carefully as a problem can lie anywhere.

As you work in a team, your fellow members, even you should understand the reason behind writing a particular line or program. Comments are a way to help it. You can add an answer to “why” in a single line, you can add a block comment for a complex one, an inline comment to describe a tricky line or you can take help of a comment out code as you are testing or debugging.

This guide covers every kind of comment you can use in Python 3. Hopefully, it has answered your question about how to use comments in Python 3.

How to Use Comments in Python 3?Python 3