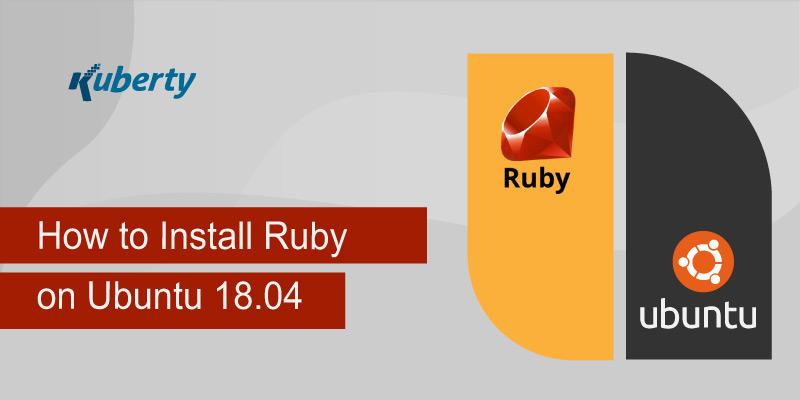 Ruby is one of the most popular programming languages among web developers since it is mainly used to create web applications.

Ruby is a general-purpose language with several other applications like prototyping, data analysis, and many more.

The main reason why people prefer Ruby on Ubuntu is that most of the code is written on a Linux server. Ubuntu is the most accessible Linux distribution.

We will show you how to install Ruby on Ubuntu 18.04 in three different ways in this article. They are from Ubuntu Repository and two other third-party tools or websites – RVM and rbenv.

All these methods of installation of Ruby have their own sets of advantages, although nowadays, people prefer using rbenv for installing Ruby.

After typing the above command, type y and click the “Enter” button for verifying the installation.

Also known as Ruby Version Manager, RVM is a command-line tool for managing, installing, and using Ruby versions when performing work. Firstly, we have to install GPG before installing Ruby from RVM. Then we proceed as follows:-

Once the command line – RVM is successfully installed, one can install Ruby by a single code.

One can download any version by changing the performance in the above code. For this instance, after installing Ruby version 2.5.1, use the below given command to check the installed version of the Ruby:-

You will receive an output that will show us the version of the Ruby installed.

So the version downloaded in Ruby 2.5.1

3. Installing Ruby with the help of rbenv

Ruby Version Management or simply rbenv is a third-party tool that allows us to switch between various versions of Ruby quickly and simply. It is not possible to directly install Ruby from the default rbenv, so one needs to install ruby-build. Simply put, Ruby is a plugin that works with rbenv build, a tool that helps us install any version of Ruby. To install Ruby using the following steps:-

a. So, first of all, we need to install and update specific packages that are essential for the proper functioning of the ruby-build tool: –

b. To install rbenv and ruby-build, one has to type the following command:-

The above code helps to create a copy of both rbenv and ruby-build repositories from Github.

c. After this, we need to add the following code to the user Path

d. Depending upon which shell or command language interpreter you use, you need to type the following codes:-

e. To install the latest version of Ruby and to make it the default version type the following code:-

Now, you need to verify whether you have appropriately installed Ruby by checking the version of Ruby installed:-

You will receive an output that will show us the version of the Ruby installed.

So the version downloaded in Ruby 2.5.1

Ruby libraries can be installed and managed with Ruby Gems package manager. Ruby Gems contain Ruby code that can be shared. Ruby Gems are primarily used as libraries, which help us install any package of our choice. For that, one should update Ruby using the following code:-

One may want to install a complete Ruby on Rails stack. App development stacks are the most widely used. Rails is the development framework for Ruby program language, which facilitates app development the quickest way possible.

Now that you’ve installed Rails, you can run the rails -v command to make sure you have everything installed correctly:

There are three different ways by which you can install Ruby on your Ubuntu 18.04 server, with each having its pros and cons. So, installing Ruby using any of the above methods depends entirely on you.

You might have understood that installing Ruby from the Ubuntu repository is comparatively easy. On the other hand, using third-party tools like rbenv and RVM helps install and uninstall the various versions of Ruby quite efficiently and quickly.

To enjoy all the features of Ruby efficiently, it is recommended to use the newest version and updates of the same. As many new updates and technology are coming up daily, it’s crucial to update rbenv so that Ruby runs efficiently.

One can do this by simply using the git pull command:

If you are using a third-party tool then simply install the tool and make the required settings using the code. Then install Ruby and check whether you have successfully installed Ruby on Ubuntu 18.04 server.

Ruby can be easily installed in Ubuntu using the repository, but third-party tools such as rbenv and RVM can be used to efficiently and reliably install and uninstall the various Ruby versions. If you prefer to use all the available features of Ruby, it would be a good idea to download the latest version of it. If the above steps are followed properly, installing Ruby on Ubuntu 18.04 server is very easy.