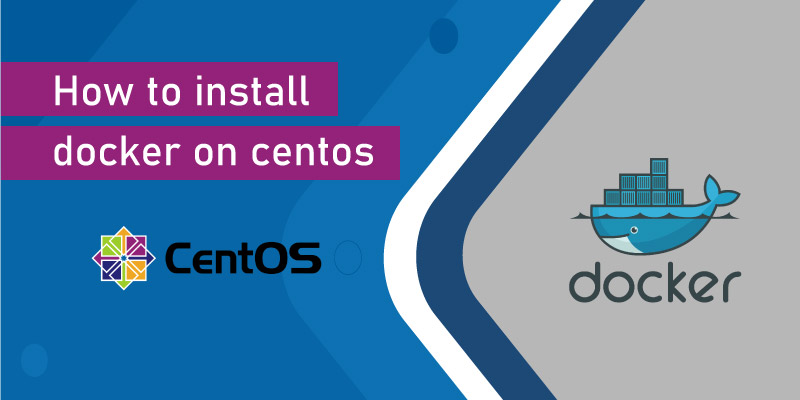 Docker is an application that delivers software in certain packages called containers, which are highly convenient and resource-friendly units dependent on the host OS. Docker uses operating-system-level virtualization to run software applications in a container.

In order to install Docker on CentOS, there are 2 methods to choose from:

We will only discuss the first method here – and save the second method for some other article – with a detailed step-by-step guide. It will help anyone looking to install Docker on CentOS. The process of using Docker will also be mentioned in detail.

Before moving on to the tutorial, there are certain things that you need to install Docker on CentOS successfully. These are:

Note: Use the following code to uninstall old versions of Docker:

How to Install Docker on CentOS?

In this section, you will be guided step-by-step on how to install the latest version of Docker from the official Docker repository.

Update the package database by running the following command:

The following command will download and install the latest version of Docker from the official Docker repository:

When the installation is completed, you need to run the following command to start the Docker daemon:

Run this command to verify that Docker is running:

The above command will download a test image and will run the same in a container. The container will print a message “Hello World”, and exit when it runs.

When you pulled the image from Docker Hub, you must have received the following output:

Now, you need to run the following command so that Docker starts after every reboot:

Now since you have the Docker service (daemon), you also get the docker command-line utility. Using the same will be further explained in detail.

For running the ‘docker’ command, it requires the prefix ‘sudo’ as it requires root privileges. However, you can let go of the ‘sudo’ prefix if you run the command in the docker group. The installation of Docker also creates the Docker group by itself. To be able to do that, you need to follow the given steps:

Add your username to the docker group by running the following command:

Now, in order to allow this change, you have to log out of the Droplet and then log in as the same user. You can also add another user to the Docker group even if you are not logged in as that user by running this command:

Therefore, now you can easily run the ‘docker’ command as a user in the Docker group without the use of the prefix ‘sudo’. The rest of this tutorial will assume that you have made this change. If you have chosen not to, then add ‘sudo’ to every command.

Since Docker is now installed and working fine, you can start running the docker command-line utility. Let’s take a look at how you can do it:

Start with running the following command:

You can view all the available subcommands by typing:

The full list of subcommands available in Docker 1.11.1 is given below:

You can view the available switches to a certain command by running this command:

If you want to see the system-wide information on Docker, run this command:

Docker Images pull images from Docker Hub by default, which, in turn, runs Docker containers. Any user is allowed to create and host their own Docker images on Docker Hub.

In this article, we discussed how to pull a Docker image when we verified that Docker is running. We pulled an image titled ‘hello-world’ from Docker Hub, which is a part of the Docker project.

Docker also allows the users to search for images among the Docker Hub collection and a user needs to type the following command to search, for example, for the CentOS image:

Then you will observe a listing of all of the images whose name matches with your search string. The output will look somewhat like this:

After choosing the image you want to use, you can use the ‘pull’ subcommand and download it on your system by typing this:

Then you can run the image that you have downloaded by using the ‘run’ subcommand like this:

If you wish to view the images that you have downloaded on your computer, then you can run the following command:

We ran the ‘hello-world’ container earlier in this tutorial. That container was the type of container that first runs and then exits after giving an output message.

Containers can do so much more than that as they are similar to virtual machines. Now, let us take a look at how to run a container with the CentOS image that we just downloaded on our computer. You can use the combination of the -i and -t switches for having interactive shell access into the container:

The output that you will receive will be like this:

After this, you are enabled to run any command you want in the container.

This step-by-step guide will help you get started with Docker by providing you the basic knowledge of the same so that you may develop further on that by putting your knowledge to practical use.