How to Check Java Version on Mac or Windows Computer?

Home / Windows 10 / How to Check Java Version on Mac or Windows Computer? 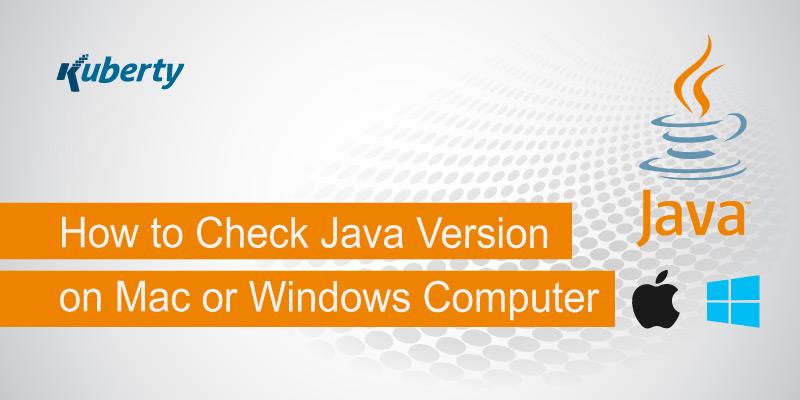 How to Check Java Version on Mac or Windows Computer?

Importance of Java on Mac and Windows Computer

You should notice that when you run any web application, program, or software on your computer system, you would sometimes get the message that Java is not installed on it. This is due to a large number of Java-based applications and websites that cannot run without Java. Java can be found on your laptops, desktops, and data centers, game consoles, and scientific supercomputers, as well as cell phones and the Internet.

It’s commonly used in the creation of web apps. Java provides enhanced assistance for constructing these online applications through technologies like Servlets, Struts, and JSPs. We can quickly construct apps connected to many key industries such as government, healthcare, insurance, education, and military due to the ease and security of this programming language.

When you install a Java program, it is translated to a language called Java Bytecode. It can run on any CPU and operating system. Java programs are only compiled once, but they are then interpreted every time they are run. Java Bytecode is also known as the Machine Code of the Java Virtual Machine.

How to Check Java Version on Windows PC?

We can install Java on your Windows computer. Some programs may require us to run a specific version of Java for our system to function properly. Each version of the software has its unique name and number. The number not only denotes a version update, but it also let users determine if their current software is outdated by comparing it with the most recent version. Users frequently wish to double-check before installing the most recent Java version. You can use a graphical tool or the command line to check which version of Java you have installed.

You can also use the Java utility to find the installed version of Java. To utilize the utility, go to the “Start” menu, type “About Java” into the search box, and click on the first result. On the first line, you will see your current Java version.

Using the Command Prompt is the simplest approach to check the Java version. With just one command line, users can verify the version of any software using Command Prompt. If you are unable to check and get the error message, “Java is not recognized as an internal or external command”, you need to verify that the Java on the machine is up to date or that the variables are correctly configured.

To access the Windows search tool, press the ‘Windows’ + ‘S’ key combination. To open Command Prompt with admin access, type cmd/command prompt and hit the ‘Ctrl’ + ‘Shift’ + ‘Enter’ keys together. Type the command given below to check the Java version on your computer.

The most popular method for checking a software’s version is to use the software’s settings. A version check feature is provided in most software. The system’s Control Panel can be used to access the Java control panel. There is an ‘About’ button there. This button will show you the Java version that is currently installed on your computer.

To open the Control Panel, press the ‘Windows’ + ‘S’ keys combination and then type Control Panel in the search box and hit the ‘Enter’ key.

Now, look through the list for Java. Select ‘About’ from the ‘General’ menu to learn about the Java version installed on your PC.

How to Check Java Version on mac?

Users can use the Terminal program to control the system in the same way as they can with the Command Prompt.

You can find what you are looking for with just one command.

Using the Terminal, you can easily check the Java version. Please take the following steps:

You may also see all of the application’s information and versions by pressing the About button. Follow these procedures to check: