How to Become a Linux Kernel Developer?

Home / Linux / How to Become a Linux Kernel Developer? 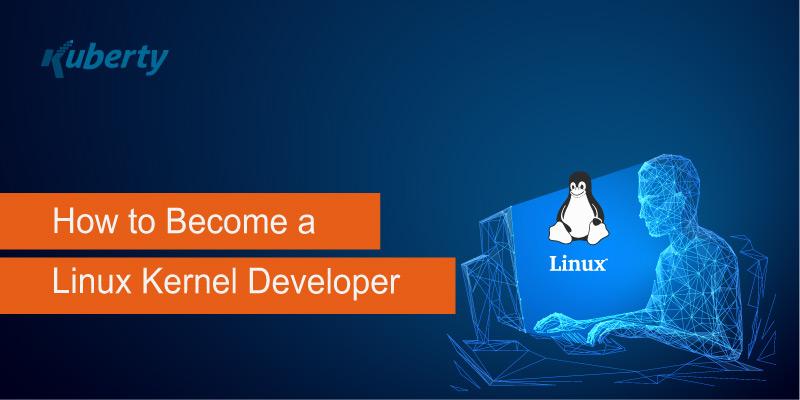 How to Become a Linux Kernel Developer?

The Linux kernel is the primary constituent of the operating system that involves Linux. It acts as the fundamental alliance between the hardware and the system processes. The Linux kernel not only interconnects these two but also manages all of their resources as efficiently as possible. The word “kernel” means “seed,” and like every seed inside a fruit, the kernel also exists inside the operating system of a computer. Being present within the operating system, the kernel manages all the key functionalities of the hardware, be it a computer, laptop, mobile phone, or server.

The code for the Linux kernel is mainly written in the C programming language, except for a few architecture-dependent portions which are written in the assembly level language. If someone wants to learn Linux kernel and aspires to become a Linux Kernel Developer in the future then they should have a good knowledge of the C language. So, learning the C language is a must for a kernel developer, although learning the assembly language is not mandatory until and unless you wish to work on low-level development for any architecture.

What is Linux Kernel?

The Linux Kernel is a non-proprietary operating system that is accessible to thousands of developers for free. The Linux kernel is a monolithic project that is known for managing all sorts of hardware, file system managers, and driver operations. The Linux kernel is a computer programme that is also referred to as the central part of the Linux operating system (OS). When a driver runs, this kernel part loads into the system first and stays in the main memory until the driver stops. It is also the bottom level of the application system that links with the hardware of the system.

Because it allows the addition and deletion of loaded kernel modules at runtime, the Linux kernel is said to be modular. Furthermore, it only stores the required modules in kernel memory and deletes the rest, improving overall system performance.

The concept of the Linux kernel was first cemented by Linus Torvalds in the year 1991. He developed the kernel for his desktop as a free operating system. Since then, the Linux kernel has evolved a lot and has supported several computer architectures, including mobile devices, supercomputers, mainframes, etc. It is also used for various free software-related projects. The concept of the kernel has been carried forward globally by thousands of open-source contributors. The Linux kernel code consists of 23 million lines, making it one of the leading open-source software projects worldwide. It has many versions, and each version is valid for up to six years. The Linux kernel came into being under the GNU General Public License version 2 (GPLv2).

What does a Linux kernel do?

The Linux kernel operates all the resources of the operating system and creates space for an application to run. It enhances the usage of the processor and the overall performance and helps the system avoid any kind of deadlock. Besides all these, a kernel has four tasks, including memory management, process management, device drivers, and system calls and security.

Memory Management: keeps a record of the system memory, like how much memory has been used, for what reason, and where it has been used.

Process Management: Regulates which processes in the system can get access to the central processing unit (CPU), when they can get access, and also for how long they can use it.

Device Drivers: The drivers work as a mediator between the computer’s hardware and the system processes.

System Calls and Security: The requests that the system processes make for services are received by the kernel.

The kernel works in its own world, which is better termed the kernel space. Here in this space, a kernel shares further memory with the processes. On the other hand, the world of the user, where they see all the files and browsers, is better termed the “user space.” If the implementation of the kernel is done correctly, then it will be invisible to the users.

What do you mean by Linux Kernel Development?

Linux Kernel Development is an in-depth examination of the design and execution of the Linux kernel.It consists of content where it lists all the beneficial points that a programmer needs to follow while writing and developing kernel code. The study also helps the programmers to get a better understanding of the Linux operating system, making the programmers more proficient and creative with their coding. According to studies, the Linux kernel is well-stabilized and sustained. Hence, many cloud computing infrastructures and cloud solution providers, such as Amazon Web Services and Google Cloud Platform, have put their faith in the Linux kernel because of its stability.

How to set off your career as a Linux Kernel Developer?

As mentioned previously, the Linux kernel is the soul of the Linux operating system. The people who are behind this, i.e., the Linux Kernel Developers, are the silent protagonists of the digital world. Developers have made the lives of businessmen and employees more efficient. Companies and organizations rely on them to ease the work of their employees and help them meet the client’s goals easily.

Like every other profession, that of a Linux kernel developer is very challenging. It takes a lot of hard work, determination, prudence, and adaptability to become a kernel developer. It also requires great commitment and perseverance, but the reward at the end is worth the effort.

There is no shortcut or a single way to achieve this goal. Developers should be well-versed in the domain on which they are working.People who are interested in pursuing a career in this field should follow these five steps to become a Linux Kernel Developer:

The C language is the first hurdle. Learning C is a must if you want to advance your career as a Linux Kernel Developer and work for a reputable company.It is more of a middle-level language that decreases the breach between the low-level language and the high-level language. The C language is useful for writing various operating systems as well as writing application-based programs. You, being a beginner, will benefit hugely from learning the C programming language as it will help you to have a great understanding of the rudiments of computer theories. Here is a list of a few books to learn about the C language in 2021.

3. Study about the Operating System and its Processes

It is a no-brainer that a Linux kernel developer should study the Linux kernel. Linux is now completely dominating in the digital space and has been known for its stability and reliability. The multitasking environment of Linux allows you to run numerous processes simultaneously. The open-source feature of the Linux kernel enables users to modify and amend kernels according to their priority. Hence, the Linux kernel can be used on a wide range of devices. The few best books to learn about the Linux kernel in 2021 are:

Lastly, shift your focus exclusively to programming. When you’re done with all the four steps mentioned above, start doing some moderate-level programming. When you start programming, you will start exposing your brain and it will work out in a very structured manner. It will enhance your thinking capabilities and give you the platform to find creative solutions to problems. The main motive of a developer is not just to solve a problem, but to solve it in a very short time. In the Linux kernel, a developer faces a new problem every day. So, to become a successful kernel developer, it is necessary to solve the problem in a way that allows you to finish coding quickly as well as save some amount of memory space.

The Linux kernel is one of the fastest programs, sometimes starting loading on the start-up menu even before the boot starts loading. A kernel developer manages the computer’s hardware and tracks the memory usage. The developer channels the data to various storage devices and, hence, helps numerous tasks run together simultaneously without any technical hitches.

Most people ask, “How long will it take for you to become a Linux Kernel Developer?” I would say it completely depends on the learner, his or her learning skills, determination level, and hard work. There is no doubt that you’ll be rewarded attractively once you become a Linux Kernel Developer. A successful kernel developer can earn up to $312,000 a year in the United States. On average, the salary of a Linux kernel developer is around $123,500 to $179,500.