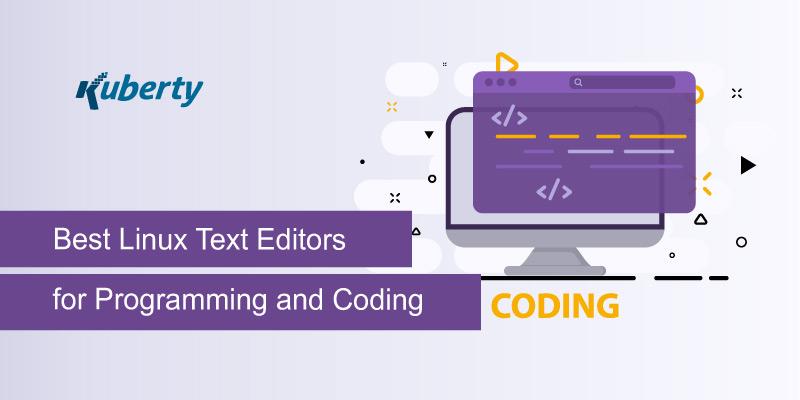 Text editors may seem uninteresting to some, but they are essential to the survival of numerous organizations around the world. From development teams to publishing, editors are used in nearly every workflow. Many of us go in and out of them throughout the day. Both free and paid versions of Linux text editors are available to make the coding and development process easier.

Some text editors are more suited to established coders, while others are better suited to beginners or writers. In this blog, we’ll go through the most popular text editor options available.

What is a Text Editor in Linux?

Individuals use text editors to code and modify HTML, CSS, JavaScript, PHP, and a variety of other programming languages. Many of their features simplify programming with fewer errors, such as syntax highlighting, simple navigation, configurable interfaces, search and replace options, etc. In Linux, there are two types of text editors:

Command-line text editors: These types of text editors allow users to enter the editor from the command line. This will come in handy for system administrators when modifying configuration files.

It is one of the most popular and lightweight tools that makes it easier for developers to work with codes, yet while being lightweight, it has a lot of features to offer. It was primarily designed with a Python API for the developers that spend their day coding. Sublime Text has the benefit of being incredibly lightweight, resulting in less resource usage while retaining some of the more complex capabilities you’d expect from a top text editor.

Sublime Text’s main advantage is that it provides shortcuts and search capabilities for quickly locating functions and making changes to numerous lines at once. It simply takes a few seconds to jump to certain symbols or phrases. Furthermore, Sublime Text produces an index of all functions and methods automatically so that you may work with shortcuts and modify it for finding code parts while working.

Sublime Text editor may be installed in Linux systems via the default package manager, as mentioned below:

For installing on Debian, Ubuntu, and Mint:

Installing on RHEL, CentOS, and Fedora:

For Arch Linux and Manjaro:

Atom is a GitHub-developed free and open-source text editor. It is created using web technologies, based on Electron (CoffeeScript, JS, Less, HTML). It’s a sophisticated text editor that is often referred to as the text editor of the twenty-first century. Some of Atom’s key features are cross-platform editing, built-in package management, a file system browser, multiple pane support, a find and replace function, and intelligent auto-completion.

You may add new features to Atom by choosing from thousands of open source packages. It’s also adaptable to your requirements and preferences.

Notepad++, without a doubt, is one of the most popular advanced Linux text editors in the market that comes in a small package without any fees and extensive editing features. It is distributed under a GNU (General Public License), which means that any developer or content producer can use the text editor immediately after downloading it.

Notepad++ is a text editor for Microsoft Windows that tries to consume less processing power than the typical text editors. One of the features that distinguish Notepad++ from other text editors is that it has been translated into 80+ languages, making it accessible to a wider audience all around the world.

Notepad++ editor can be installed in Linux systems via snap package manage by running the following command:

The Vim text editor is a robust, dependable editor that interacts with various popular tools and is available for Windows, Linux, and Mac. It may be used as a stand-alone application in a GUI or via a CLI. Vim is a text editor that was created in 1991. In the past, it was a widely used text editor used by programmers to produce scripts and updates.

Even after being one of the oldest editors, it has kept on evolving over the years and is still loved by developers all around the world. Vim is one of the more sophisticated text editors on our list and it also implies that it is the most user-friendly. Vim has a steep learning curve and needs a desire to immerse oneself in a completely new feature set that may differ from that of other text editors.

You may use your default package manager to install the gVim editor on Linux computers. Execute the following command:

Execute the following code for installing on RHEL, CentOS, and Fedora:

For Arch Linux and Manjaro:

Despite being developed by Microsoft, Visual Studio Code is a text editor that is entirely open-source, with the source code easily available on GitHub. It has around 2.6 million users as of now. VS Code has a sleek UI and is extremely lightweight, and it offers lots of advanced features and optimum performance. In addition, it offers a large library of extensions that provide compatibility for additional languages, commands, debuggers, and other features. This cross-platform tool (Linux, macOS, and Windows) includes TypeScript, JavaScript, and Node.js support as well.

The Visual Studio Code website contains several sections where you can learn more about the tool. There is a manual page that guides you through the setup process and how to handle different languages. You can also discover all of the Visual Studio Code keyboard shortcuts and learn some tips & techniques. There are a number of great features in Visual Studio Code, such as an integrated blog, a web update site, an extension library, and API details.

If you’re using CentOS, Fedora, or OpenSUSE, you can also get the .rpm file from the official Visual Studio Code website.

This text editor was created originally by Adobe in an effort to provide a more contemporary, open-source alternative for software developers. This is a free text editor that includes some visually attractive capabilities for evaluating your working process and also enables frontend developers to inspect the modifications. Brackets focus on robust coding, and it does so with the aid of inline editors, live previews, and well-organized files.

Brackets is free to use and has a good community. It’s also compatible with popular OS like Mac, Linux, and Windows computers. The user interface is simple, but the text editor offers a lot of options for you to experiment with.

Brackets editor may be installed in Linux computers using the snap package manager:

The primary goal of this general-purpose text editor is to make it as easy to use as possible. Gedit has a simple and clean user interface that follows the GNOME project concept. Users can install and use this robust text editor even on Linux.

Gedit was initially released to the public in 2000, and it was written in the C programming language. The internationalized text is fully supported by this open-source and free software. Configurable syntax highlighting is available in Gedit for a variety of programming languages, including C++, C, HTML, Java, XML, Python, Perl, and others.

It may not come pre-installed on earlier Linux versions. Therefore, use the following command to install gedit:

Nano is an incredibly user-friendly text editor for Unix-like operating systems. Published in June 2000, it emulates the Pico text editor and adds a number of new features. It has a command-line interface that is interactive and easy to use.

Nano editor can be installed in Linux systems using the default package manager:

On Debian, Ubuntu, and Mint:

For installing Nano on RHEL, CentOS, and Fedora:

Execute the following command for installing on Arch Linux and Manjaro:

JED is a widely used and very prominent Linux text editor that utilizes the S-Lang library. This cross-platform utility is also available for Unix, VMS, OS/2, BeOS, Windows, OpenVMS, and other systems. You can run JED’s earlier versions if you’re using DOS.

The main advantage of using JOD is its lightweight design, which allows you to use it with ease on systems with minimal resources. Color syntax highlighting, code folding, emulation of editors like Emacs, multiple programming modes, editing TeX files, rectangle cut/paste, and other features of the JED editor are some of its features that make it loved by millions all over the globe.

Execute the codes for installing Jed editor in Linux systems:

For installing it on Debian, Ubuntu, and Mint:

For CentOS, and Fedora:

For installing the same on Arch Linux and Manjaro:

KWrite was originally released to the public in the year 2000, and it has come a long way since then. It is a KDE-developed lightweight text editor based on the KATE text editor and the KDE KParts technology

Run the following command for installing Kwrite on your Linux Operating System:

We hope that the blog will help you to discover the best and reliable Linux Text Editors for Programming & Coding available in the market. They have a simple installation process through several lines of codes. They help in various ways for making the programming and coding process go quick and easy.