Home / Kubernetes / What is Helm? 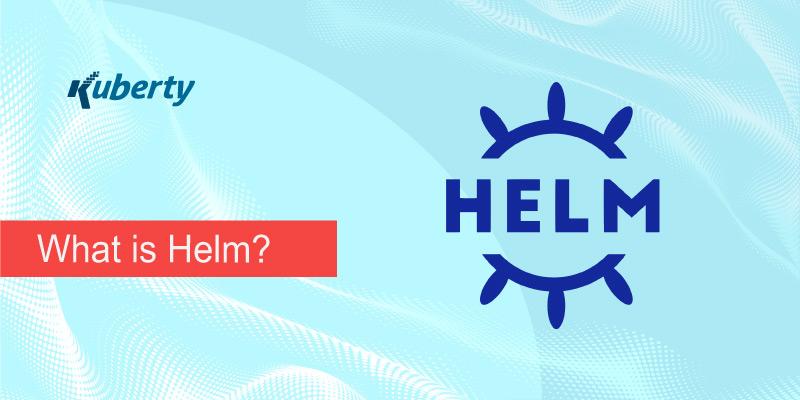 The deployment of applications through Kubernetes, which is the most popular container-orchestration platform, can be really daunting at times. Successfully building one application involves lots of manual effort and requirements of various Kubernetes resources, such as pods, services, Containers, etc. and every one comes with a basic requirement of writing descriptive YAML manifest files.

However, Helm makes the process a lot easier. It is a package manager for Kubernetes through which organizations would be able to have more ease in the processes like packaging, configuring, and deploying applications and services on Kubernetes clusters. It is now recognized officially by Kubernetes itself and it is handled by Cloud Native Computing Foundation, which is a non-profit responsible for handling open-source projects associated with Kubernetes.

This article will take you through all the important information related to Helm in detail. But if you are a newbie to the topic, it would be a good idea for you to have a clear understanding of Kubernetes first.

Kubernetes is an open-source container orchestration platform that simplifies and automates the management and deployment of cloud-based applications to a great extent. Websites or mobile apps with dynamic features and complex codes can be deployed with the help of Kubernetes on physical machines.

Originally developed by Google, Kubernetes enhances the process of deployment and management of container-based applications. Developers have to make use of various tools known as patterns to enhance and smoothen the process even more. Kubernetes allows organizations to achieve the following:

In simple words, Helm is a package manager for Kubernetes. However, it is utilized for various other uses and has a very wide scope when it comes to functionalities. It is an open-source project which is currently maintained by CNCF (Cloud Native Computing Foundation). The main intent of using Helm is to manage Kubernetes YAML files that are being created on Kubernetes projects.

It makes use of Helm Charts for achieving the goals. Charts are bundles of Kubernetes manifests that are used for creating, modifying, and deleting Kubernetes resources such as pods, deployments, and services. Every Helm chart can have child charts and dependent charts that eventually create a whole dependency tree for particular projects. Organizations only have to install a single command for installing entire applications instead of executing tons of code on Kubectl and downloading files.

In addition, Helm charts enable users to create versions of manifest files. Therefore, an individual would be able to fetch particular chart versions quickly. Helm also keeps a record of the history of deployed charts for allowing users to roll back older versions in case of an emergency. Since Helm and Kubernetes have stronger collaboration, users are saved from writing complex syntax files for using Helm. Users just have to drop their template files. Have a look at some of the features of Helm:

Who Uses Helm and Why?

Developers make use of Helm in the production environment for orchestrating multiple Kubernetes resources and clusters with different configurations. Some of the common industries that rely on Helm are software vendors and open-source projects. With the help of Helm Repositories and Charts, organizations would be able to deploy applications easily into the Kubernetes environment.

By making the use of Charts, they help in describing the Kubernetes resources and can be archived or sent to Helm Chart Repositories. As of now, organizations have to get Helm from outside the Kubernetes cluster and make use of kubectl for connecting and interacting with the Kubernetes cluster. For installing Helm on your system, you have to go with steps that vary for different operating systems.

Helm packages are known as charts and they are composed of YAML configuration files along with certain templates that get rendered in Kubernetes manifest files. On the creation of every Helm chart, they get a dedicated version number for semantic versioning. They have two advanced features known as Chart Hooks and Chart Tests. They enable easy interaction with the lifecycle of the product and the ability for running commands/tests that can go against default configurations. Following are the main components of Helm chart’s infrastructure:

Charts can be installed directly from local directories by executing the commands. Alternatively, an individual can get these packaged charts by downloading and installing them directly from the chart repositories.

How to Create a Helm Chart?

Creating Helm charts is a cakewalk. Before proceeding, ensure to go through the following prerequisites:

For creating a Helm chart, run the following command:

Running this command will automatically create several directories filled with files. These files would eventually be used by Helm for creating charts. Following are some of the internal files among the tree of directories:

It is a YAML file that contains information regarding the chart. It is composed of a chart version, name, and description for making it discoverable easily if published in open repositories. In addition, users can also configure external dependencies with the help of dependency keys.

It is the file in which users define values that are required to be inserted into the template. You can consider this as a properties file that, in collaboration with templates, defines values that are utilized for creating Kubernetes manifests.

This is an important component for running Helm. The Template Directory is a place in which all the Kubernetes manifests make use of Values.yaml and if required, additional YAMLs get created with the help of templates. Helm makes use of Go Templating if the templates require some conditional logic to be implemented.

A Helm chart contains lots of other fields as well, but the aforementioned ones are the most important that one should be aware of. Always keep in mind that while installing Helm, make sure to always install the latest version. Indeed, its previous versions work but they require a server-side component known as Tiller that is used for tying Helm with clusters. However, the latest versions (above 3) have replaced this with CRDs (Custom Resource Definitions), which are much more convenient and quick.

So now we are done with creating the charts, but what’s the next step? Does one have to download the complete repositories for deploying Helm charts? Well, the answer is no.

Helm offers a public library where all the charts get listed for users all around the world, which is similar to Docker Hub to a great extent. An individual can simply host their charts on these repositories by uploading them online. For downloading charts, users just have to click on them in the repository. Also, because every chart is eventually an index.yaml file served in static web servers, users are enabled to create chart repositories from anywhere. For example, a chart can be hosted on GitHub Pages and still can be accessed through any domain.

Therefore, organizations don’t have to clone repositories forever and can make their charts restricted from the normal audiences as well. Several tools like Azure CR are used to make chart repositories or full solutions like Chart Museum, which enables users to create charts that are stored with easy-to-navigate UI.

When a chart is in the process of getting installed, Helm incorporates the template of the chart with the configurations assigned by the users and the default configurations defined in value.yaml. They further get displayed in Kubernetes manifests that get deployed through the Kubernetes API. This complete process creates a “release”, which is the specific configuration for the deployment of a specific chart.

The execution of releases is extremely crucial because it helps in quickly deploying similar or previous applications again and again in clusters whenever required. This saves users from creating multiple instances on MySQL along with saving them from updating all the different instances on the charts individually. Also, achieving the same with MySQL may result in incompatibility issues, such as one application server is available for the update but others are not. However, releases allow these application servers to update individually without relying on the availability of others.

Release is required to be updated in case the chart associated with it gets modified, or when the configuration needs to be changed. Either way, every update will automatically create a new revision of the release, and users would be able to roll out any previous revision whenever required.

Helm is a package manager for Kubernetes that enables organizations to have more ease in the processes of packaging, configuring, and deploying applications and services on Kubernetes clusters. Also, you must know that Kubernetes is an open-source container orchestration platform that allows you to manage and deploy containerized applications with ease.

Helm is widely used in the production environment for orchestrating multiple Kubernetes resources and clusters with different configurations. Helm makes the use of packages that are known as charts, which are composed of YAML configuration files along with certain templates that get rendered in Kubernetes manifest files. Charts can be installed directly from local directories by executing the commands. For Hosting helm charts, one can simply upload them on online and official Helm repositories.