Home / Kubernetes / What is CaaS? 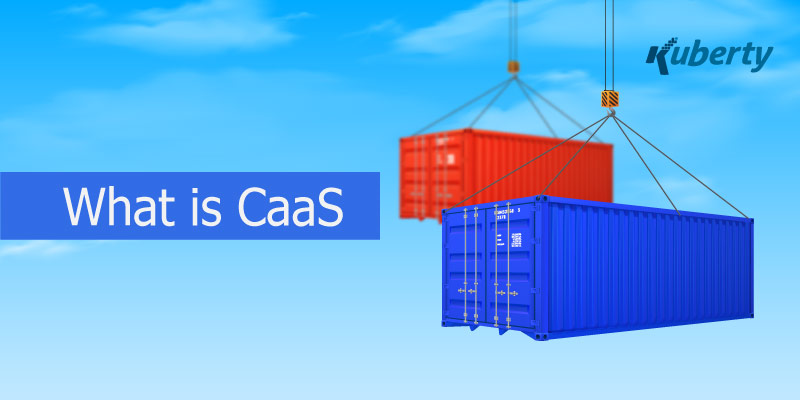 Does your organization is calling for the deployment of container-based virtualization? But you don’t want to spend tons of dollars on the hardware and software components required for the same? If your answer is yes, then surely Container-as-a-Service (CaaS) is for you.

It is the latest and most advanced service model in cloud computing that comes in a complete package. It is extremely beneficial for building secure and scalable applications with easy deployment options. Let’s roll down the blog to learn every detail about CaaS along with its usage and advantages.

CaaS is an acronym for Container-as-a-Service. It is a cloud service model through which tasks related to the management of containers/applications such as uploading, organizing, starting, and scaling can be accomplished easily with minimal manual efforts. The applications or containers developed in CaaS can be deployed both on-premises and on the cloud.

CaaS takes the help of container-based virtualization, APIs (Application-Program Interface), and even a web interface for executing the required operations with ease. It allows developers to build containerized applications with better scalability and high-end security options by taking the aid of on-premises data centers or the cloud. It is named CaaS because containers and clusters are used as a service for the deployment of applications. However, it is often considered as a subtype of Infrastructure-as-a-service (IaaS) with the main commodity as containers instead of physical hardware and VMs.

Here are some key things about CaaS that you need to know:

Before the introduction of CaaS, organizations have to take care of the deployment, management, and real-time monitoring of the whole infrastructure on which the containers run. The complex infrastructure is usually composed of a collection of various hardware along with network routing systems that utilize DevOps resources for management. However, CaaS allows developers to think of the higher-level container operations instead of toggling with lower and repetitive infrastructure management.

What are Containers in CaaS?

Containers are the standard unit of software that binds up all the codes along with required dependencies for the applications to build, deploy and transfer quickly from one environment to another. They’ve emerged as a mechanism to have a better control virtualization environment. Therefore, instead of visualizing the entire machine along with OS and hardware, containers build an isolated infrastructure for the applications, including all of its critical dependencies such as binaries, configuration files, etc. into a discrete package.

Containers are often compared with virtual machines because both are used for deploying applications in virtual environments. However, the major key difference between them is that the container environment is only composed of the required files that an application needs, whereas virtual machines are tailored with additional files and services that increase the load on resources.

How CaaS Can Help Your Business

Following are some of the benefits that businesses enjoy by using CaaS:

Applications created on the containers are packed with all the dependencies and every other thing required for them to run along with the configuration files. This makes them a complete package that can be easily transferred from one environment to another. Thus containers are highly portable and make it possible to launch applications in various environments with ease.

Containers don’t demand separate operating systems and can efficiently work on lesser resources as compared to virtual machines. A lot of containers can run on a single server with fewer resource requirements. This workflow helps in reducing the costs associated with data centers and physical resources.

The high-end isolation among the containers and no interruption from one another results in better security. If one container or application faces manipulation or interruption, then the other ones working in parallel will not get any sort of issue. It also helps in the smooth management of the host system. Developers can launch updates more frequently along with improved security because they don’t need any particular software to run applications.

With the help of CaaS, creating, starting, replicating, and destroying a container can be done instantly. Therefore, developers will be able to enjoy a faster development process, and thus, it becomes possible to release new and improved versions of an application frequently. This also improves the customer experience as businesses can quickly resolve bugs and issues in an application reported by customers.

CaaS-based development supports horizontal scaling, which allows end-users to add various identical containers within the same cluster. Moreover, you can reduce the costs and improve the ROI by running containers only when you need them with the help of a smart scaling option.

Container-based development always ensures effective development. Allowing applications to get developed as if they build locally with the removal of all the inconsistencies. Elimination of these inconsistencies aids in streamlining the debugging process.

Things to Consider When Choosing a CaaS provider

Businesses can deploy some popular provider-managed container solutions such as Google Cloud Platform, IBM Cloud, or Microsoft Azure. However, before choosing one, they should consider the following things:

CaaS is available on the cloud and is utilized for uploading, creating, managing, and running containers. The real-time interaction of the container environment happens via either a graphical user interface (GUI) or through API calls. The CaaS service provider will help you know which container is available for usage. However, it’s important to note that every CaaS platform is an orchestration tool or orchestrator that manages the complex container architectures smoothly.

The platforms used in the development environment are composed of various containers that are distributed on various physical and virtual systems that collectively make it possible to run different applications. The operation and functionality of containers require tons of consistent efforts and it is nearly impossible to manage them manually. Therefore, utilizing the CaaS platforms and organizing the interactions between containers, becomes the most feasible solution.

Also, the orchestration tool you are using has a direct link with the CaaS framework and it influences the operations on the cloud. You can opt for the following container-based virtualization tools that are currently leading the market:

To utilize the services offered by CaaS platforms, an individual should be well-versed with the containers and their applications. Generally, businesses use containers for developing, testing, and deploying applications. Utilizing CaaS will result in reduced cost, enhanced security, better portability, and speedier development of applications.