Top Git Interview Questions and Their Answers in 2022 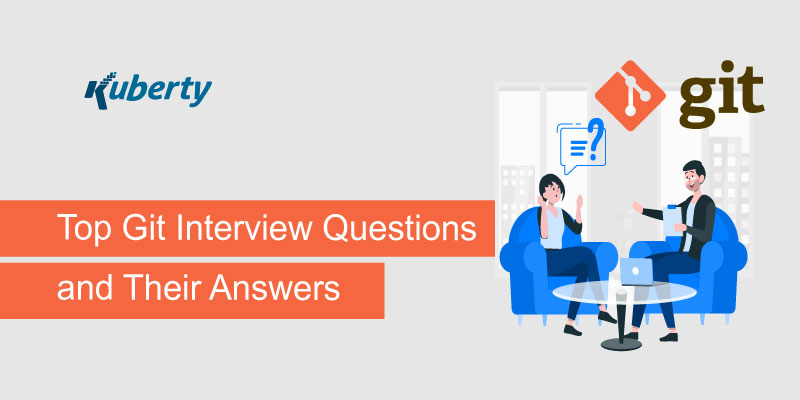 Top Git Interview Questions and Their Answers in 2022

For managing source code, there is no better tool than Git, used by at least 40 million users worldwide. Git is a very popular topic among programmers, but it can also be helpful to non-technical people. It offers features such as managing tasks, tracking bugs, and more. Git is used in IT sectors to achieve DevOps, but since it is so popular, it can be used in many other industries in the future.

But if you want to be a DevOps certified expert, then you will have to get at least 10 years of experience in the field. And you will also have to pass interviews to prove your skills. In this article, we have compiled a list of the most frequently asked Git questions and the answers they provided. Here you’ll find the most popular Git interview questions, including beginner level, intermediate level, and advanced level questions.

If you have not learned about Git deeply, then the basic interview questions and their answers will give you knowledge about what it is. But for your information, Git is a distributed version control system (DVCS) that helps you manage all types of projects efficiently and neatly. Here, have a look at the most asked Git interview questions so that you get to know more about them.

1. What is a Version Control System (VCS)?

VCS keeps the record of every change you make to a file in the server and it can also store the recent data that you set to your files. Therefore, you can pick out a specific version of the file later whenever required. And if you have a team, then you can allocate every member with a version of the file to make relevant changes.

Git is an instance of a version control system that tracks variations of the server file and maintains the history of the modifications. With Git, the developers can create new codes, fix bugs, and perform the tests confidently because they can be restored again. In short words, Git is a tool that manages source codes in application development.

3. What is the Distinction Between Git and Github?

With Git, you can maintain changes to the system files, manage tasks, or track the changes that you are making every day. Git also helps you manage your project by taking help from other team members. Github on the other hand refers to a Git repository hosting service and it offers a GUI. It also allows different members to work together on the application development no matter where you stay. Thus, it makes it easy to collaborate with different individuals.

4. What do you Understand by Git Repository?

Git repository is where all the git files are saved and there are two types of repositories: one is local and the other one is remote.

How to Create a Repository in Git?

You may enter the Git init command in the terminal to create a blank repository in a Git directory. This command will bring on a hidden.git folder in the window. Apart from that, you can use the following git repository commands for different functions:

There are some benefits of using Git for software development. It includes the faster release of development cycles, easy collaboration with your team members, widespread acceptance of web applications, ability to manage the source codes easily, and more.

2. What Language has been used in Git?

3. What do you Understand by Commit Message and Commit Command?

With a commit command, you can record the progress of the Git project in a local repository and you can only execute this command after you add the files to the staging area with the Git command. You can write a commit message with the ‘git commit -m’ command.

4. What are the Most Familiar Git Hosting Repositories?

After you know the basic things about Git, it’s time to dig a little deeper.

1. How do you Define the Git Push Command?

2. How do you Define the Git Pull Command?

You can use this command to get and mix changes of the separated repository to the local repository. There are two commands in Git pull: git fetch and git merge.

3. What is the Dissimilarity Between Git Push and Git Pull?

Git push fetches new data from the remote repository where git pull updates the current data with the recent changes of the server. Git push does not apply any new data on your working files but git pull does. You can use git push anytime to update remote branches but git pull will only merge the remote file changes with the local files.

4. What does Merge Conflict Mean?

When Git can’t resolve the distinction between codes, the merge conflict appears. Git can only merge files correctly when the commits come from different lines or branches.

5. How to Fix a Merge Conflict?

To fix a merge conflict, open the commit and change the required items on it and you may apply the Git add command for staging the newly merged files. Then create a new commit with the Git commit command and Git will then generate a different merge commit to confirm the merge.

6. How do you Relapse a Commit Which has been Presented Publicly?

If you want to switch branches on your application development to work on a different project, you can use git stash. You can’t create commits in unfinished tasks but you can get back to it after sometimes using stash. Stash will use your modified tracked files and store them so that they can be usable next time.

8. How to Find a List of Files that you Have Changed in a Specific Commit?

The advanced level git interview questions are harder than the previous level.

1. What are the Many Cases a Merge can Register in a Conflicted Stage?

You will see two main states when a merge enters the conflict stage: one is during the beginning of the merge and the second one is during the merge. The merge will not begin if there is a failure such as a change in the working directory of the stage in the project. But you can stabilize the process using different commands.

2. What is the Difference Between Git Merge and Git Rebase?

3. How do you Fix a Broken Commit?

The “git commit –amend” command will help you fix a broken commit in Git and will gather the stage changes of the previous commits while it could create a totally new commit.

4. What is the Distinction Between Git Remote and Git Clone?

You can create, delete, and view connections with other repositories using git remote. You can also utilize it to address a remote or central repository. But the git clone will create a clone or a copied version of a specific repository and you can use it to target a current repository.

5. What Does Git Stash Drop Mean?

6. What Work will be Restored When you Fix a Deleted Branch?

The files that you stashed and stored in the stashed index will be restored but the untracked files will be deleted.

You can pick particular commits from a branch of a repository using git cherry-pick and then use it on another branch. You can also undo changes you have made to the improper branch mistakenly and then you can navigate to the right branch and use the git cherry-pick command to pick the right commit.

8. How to Find Out if the Branch is Merged or Not?

By now you have the idea of what types of questions you could be asked in a git interview and depending on your level, you can practice and memorize more to get a good score. To recap, Git is really helpful in software development projects because it allows you to collaborate with different individuals so that you can handle large and small projects efficiently. Also, if there is an unfortunate change to the versioning system, you can revert the code back to its previous version to save effort and time. In case you need more help with the Git interview process, do let us know in the comment box below.