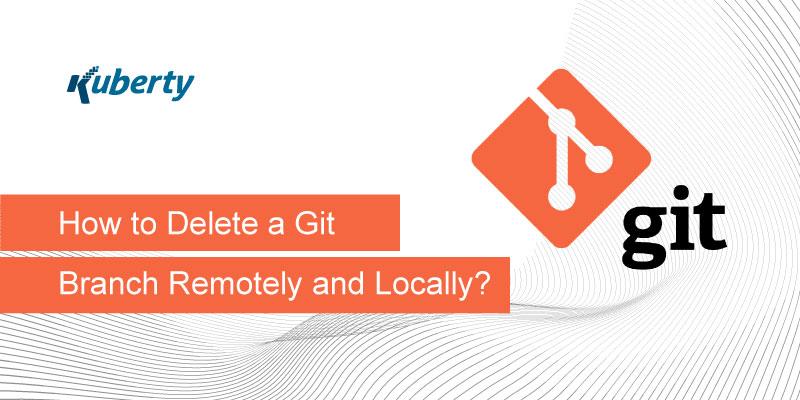 Git branches can be referred to as integral parts of software development and every developer will admit this fact. No matter whether you’re developing an app, or fixing bugs on an existing software platform, Git branches come in handy. You often need to collaborate with other developers and work as a team to develop a software application. In such a scenario, Git branches tend to be very essential to keep your line of work separate.

However, you may need to delete Git branches on and off due to different reasons. Aren’t you familiar with the process of deleting Git branches? Or are you unsure about why you need to do that? This article will help you find the right answers to all your questions regarding Git branch deletion.

What is a Git Branch?

You are bound to use software repositories while developing a software program or application. A Git branch is nothing but a separate version of the software repository you’re using. A Git branch makes your task shift from the main project to a separate pathway. That’s how you get the opportunity to differentiate your work from your team members’ works. In short, your Git branches showcase the moderations you have made to an ongoing software development project.

Whenever you make some changes to the existing code base to add some new features, you create a new Git branch so that your codes don’t mix up with the main code base. So, keeping a track of your work becomes way more effortless. Later, you can delete the Git branches you created by merging your changes with the main project.

Disadvantages of Git Branches that Lead to their Deletion

How does it feel when you’re unable to merge a Git branch with the main code base after working hours on the codes of the branch? You may face something like this anytime without having any clue. Once you become the victim of a merger inconvenience, you need to spend prolonged hours fixing the merger issue. After putting effort into adding new features to an application, it becomes annoying to waste extra hours in merging your Git branches to the main project.

When you’re working with your teammates remotely using Git branches, the chances of code misplacements become higher. As you’re creating a branch pathway to work on your codes, you are supposed to check the main project repeatedly to see if any of your codes were altered or not. That’s a common scenario when you plan to create a Git branch to work independently. As a developer, you surely know the pain of getting a code displaced from your developing project. Also, it’s next to impossible to check the changes of the main project every other minute. So, this is a major pitfall of Git branching.

Feedbacks can be the Point of Concern

Updating your team members and seniors about what you’re doing isn’t possible every time. Negative feedbacks and reworks are bound to come your way when you create a separate Git branch to work on a project. As you work using a specific Git branch, your team members and project supervisors aren’t aware of what you’re doing. Your work may not necessarily please them always. Therefore, you might have to work overtime to rework your project and make the desired changes. Ultimately, the entire project will get delayed and you have to put double effort too.

These are the consequences that you would face as you start using Git branches to complete your projects. Anyway, that doesn’t mean you shouldn’t use Git branches. If a long project is assigned to you, make sure you utilize Git branches on a short-term basis. Also, you can avoid the pitfalls by integrating your work with the main code base continuously. Divide your entire work into small parts and keep merging your work with the main code base as you complete every small part. That’s how you can reduce rework requirements.

Deleting Git branches from a repository is a common thing every developer performs regularly. But why is it important to delete Git branches and clear Git history regularly? The following points make it essential to delete the Git branches you don’t use anymore:

When your repository gets overloaded with Git branches, it becomes hard for you to keep track of all of them. Also, you may face difficulty in finding out the necessary Git branch for a particular project in the crowded repository. Hence, deleting used and old Git branches from your repository is a mandate.

How Risky is it to Delete Git Branches from Repository?

Limiting the number of Git branches in your repository is a prior task for you to access the necessary Git branches whenever required. Now, the question is how do you do that? Go through the following sections to have a clear idea about the entire process.

When you want to track all the remote branches, use this command:

This command helps you check all the commands present in your repository, including local branches and remote branches:

To find out local merged branches, type in this command:

For remote merged branches, use this command:

When you’re about to delete a single local Git branch, this command will make your task way easier:

Therefore, to delete an unmerged local Git branch, use this command:

You can also choose to delete multiple Git branches at once. It becomes possible with this command:

With this portion, you can select all the Git branches that are already merged and are of no use:

This portion of the command line excludes the branches you want to keep in your repository:

This portion of the command line deletes the rest of the selected Git branches at once:

How do you delete non-existent tracking branches?

To delete them, input this command:

Now, when you’re planning to delete a single remote branch, this command will get the job done for you:

This command works for all merged and unmerged Git branches that are present in your repository. Also, you have the option to delete all the remote branches of your repository at once. Let’s see how it is done.

This single command deletes all the merged remote branches within seconds:

After executing this command, you need to input the following command to complete the process:

That’s all you need to do to delete all the merged remote branches from your repository effortlessly.

How to Restore a Deleted Git Branch?

Also, make sure you attempt to restore a Git branch immediately after deleting. Otherwise, you may not be able to restore it conveniently. Now, what’s the process to restore a deleted Git branch?

When you try to restore a Git branch right after deleting it, you are supposed to find this command on the terminal:

Now, you can use this command to restore the deleted Git branch:

You can use this command to find the ‘sha’:

Follow the other steps mentioned above to complete the restoration.

Also, we have provided a detailed guideline on how you can delete old and unusable Git branches from your repository. Even if you’re a beginner, you can delete Git branches smartly by following the instructions given above. We have attempted to break down the process into simple steps and make the process as easy as possible. We have also mentioned the procedure to recover Git branches you’ve deleted accidentally. So, there’s no point in hesitating while using Git branches to complete your programming tasks. All you need to do is to adhere to the instructions. So, put your knowledge into work and make your software development project smarter and better.