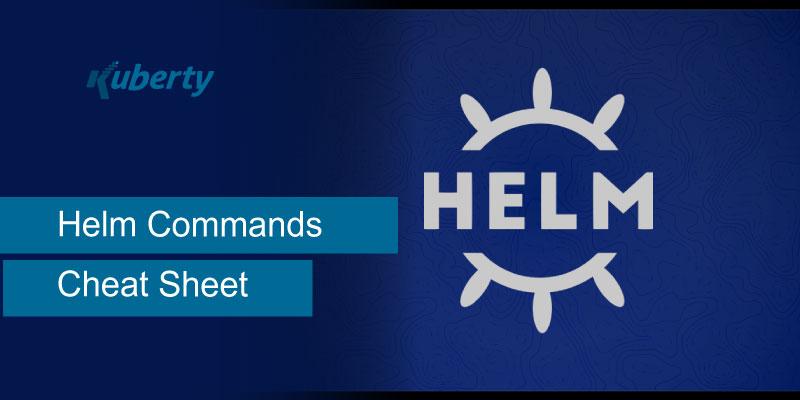 Helm is a really strong tool that you should look into if you’re exploring Kubernetes. It is a package management tool for Kubernetes that manages the deployment of Helm charts, which are collections of pre-configured Kubernetes application resources.

Helm includes nearly every command required for easier app administration in a Kubernetes cluster. In this blog, we will look into Helm and learn about several helpful Helm commands in the Helm command cheat sheet.

As mentioned above, Helm is a package management tool for Kubernetes, but it is also used for a variety of other purposes and has a broad range of capabilities. Its primary purpose is to handle Kubernetes YAML files that are developed by Kubernetes projects. Helm Charts are used to carry out the tasks. Charts are collections of Kubernetes manifests used to create, edit, and delete Kubernetes resources including pods, deployments, and services.

Helm charts are made up of child charts and dependent charts, which together form a project’s whole dependency tree. Instead of performing reams of codes through Kubectl and file downloading organizations, the users just need to execute a single command for installing complete applications. Helm charts also allow users to create several versions of manifest files. As a result, the users would be able to quickly retrieve certain chart revisions. Helm saves the record of deployed charts so that the users may revert to previous versions in the event of an emergency. Because Helm and Kubernetes have improved their interaction, the users no longer need to write complicated syntax files or anything else to use Helm. Other uses of Helm include:

Let’s jump into the Helm command cheat sheet, which includes all the frequently-used Helm commands. However, one should ensure to go through the following prerequisites first:

Helm’s main purpose is to manage Kubernetes apps. Helm allows you to run test installs and modify the installation process to fit your needs, in addition to the fundamental functions of installing and uninstalling applications.

The command for installing the app:

Installing the applications for particular namespaces:

Overriding the default configurations with the one specified in the file defined by the user:

Running a test installation for validating and verifying charts:

Run the following command for adding remote chart repositories. This creates a repository, which is a collection of charts. Many charts may be found in repositories, that are also available at open-source repository servers:

By making the use of Helm search, users can search for charts or all of your system’s repositories (repo option):

For viewing the information about a particular chart, or their value, run the Helm show command along with the chart or values:

Run the following command for installing the chart’s dependencies. If you need to download a dependency that you indicated in your Chart.yaml:

The following command will help individuals to install a chart from a repository. This will help them in ensuring that the repository is configured first.

Installing charts with reference through URLs. Doing this will enable users for specifying URLs to the repository during installation:

Installing charts from a packed file:

Installing Helm chart from unpacked chart directory. It is extremely beneficial when users are developing charts locally, or the chart is not published on public repositories:

For installing templates that overrule configurations defined in the file. For doing so, use -f in the install command. Keep in mind that executing this command will override all the default values:

For installing Helm charts that can override their default values directly from the command line::

4. Getting Information about Deployed Charts

Run the following command for listing all the releases or charts that are deployed on your Kubernetes clusters:

The below-mentioned command will help individuals to get the YAML file for all of the objects that are composed of all the releases of the objects created during the Helm installation:

Printing the status message of releases. This release gets created automatically every time a chart is deployed, and the following command will help is displaying the release:

All of the repositories (remote sources for obtaining charts) that you’ve added to your Helm installation are listed here:

Generating indexed files that can be found within the current directories:

Searching repositories on the basis of keywords:

Searching Helm hum by making the use of keywords:

The Helm lists tool lets you categorize releases in a Kubernetes cluster using many criteria, including regular expressions. Utilizing commands like Helm status and history, you can get more info about releases.

Listing the releases on all the namespaces that are ready:

Listing releases into the specific format defined by the user:

Applying filters to the list of releases by utilizing expressions:

Displaying the version history of releases:

The command for run tests for checking the health of charts and figuring out the possible issue:

Downloading a chart along with extracting the archived content directory:

Displaying all the chart dependencies:

8. Developing Your Own Charts

Packaging software for using and operating them with Helm is the process of creating charts. For creating one from scratch, you have to first run the helm create command for initializing the creation of the chart on your system.

Thereafter run the below-mentioned command for creating your own chart. Right after executing it, a new skeleton or boilerplate chart at ./mychart will be developed that can be edited and customized as per your need.

For locally rendering the chart templates, execute the helm template command for showing up the output YAML directly from Helm chart. This will also be useful in debugging the charts:

Helm is a Kubernetes package management tool whose main function is to deal with Kubernetes YAML files created by Kubernetes projects. The duties are carried out using Helm Charts, which are the collections of Kubernetes manifests used for creating, editing, and deleting Kubernetes resources such as pods, deployments, and services.