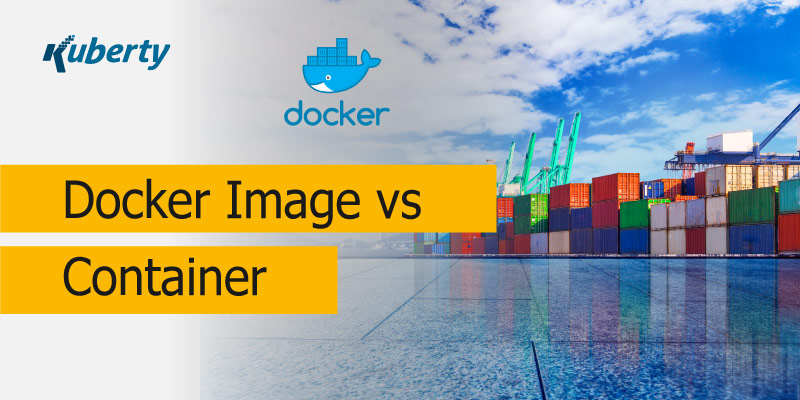 Docker has popularized containerization to a whole new level. Along with helping users to create, test, and deploy applications, Docker is extremely compatible for integrating with new technologies. Over the years, it has helped millions of businesses to build self-sufficient and lightweight containers that work efficiently on any device that supports Docker.

Even though it is simple to get started with it, a few of its dynamics and terminologies are quite confusing to grasp in one shot. In this blog, we’ve covered two of them in detail. Moreover, their differences are also covered, which often confuse a lot of people. The duo is none other than “Docker Image” and “Docker Container”.

What is Docker Image?

A Docker image is an unchangeable file composed of all the essential components, such as source code, libraries, and dependencies required for applications to function. Consider them to be a read-only snapshot of the containers. Images are created with the build command, and they’ll produce a container when started with the run command.

Because they cannot be changed just like templates, an individual can’t run them. Instead, they can visualize an application for a specific instance. Therefore, they help developers to test and experiment with software in stable and uniform conditions.

All of the containers are just running images because every time you create a container, you’re basically constructing the read-and-write copy of its filesystem, that is the Docker image.

Moreover, a container layer also gets added that allows modifications on the copy of the image. An unlimited number of Docker images can be created with one image base by manipulating the initial state and saving the existing state.

All of the Docker images get stored on a Docker registry such as registry.hub.docker.com. These images also get compressed and are composed in different layers so that only quality and fewer data can be sent. Have a look at some of the points regarding the Docker image:

What is Docker Container?

Containers are basically a run-time environment in which users can run applications isolated from the system they’re running on. Moreover, it also helps them to run a lot of applications in parallel on the same system and at the same time without interrupting each other.

Containers are extremely compact, lightweight, and portable units through which the process of running applications becomes quick and easy. Users can also deploy robust applications through a container environment.

Because containers are autonomous and work in extreme isolation, they efficiently ignore interrupting other running containers. Docker claims that these containers offer the strongest isolation capabilities in the industry that is also beneficial for the security of applications.

Containers are also often compared to Virtual Machines but the major difference between them is that they make virtualization at the application layer. Therefore, they use the kernel, the operating system, memory, etc. from the host system. This results in making them lightweight and quick as compared to VMs.

The truth is that they never work in opposition and shouldn’t be contrasted as opposing entities. Instead, one cannot function without the other and together they unleash the full potential of the innovative Docker technology.

However, they have a few small but key differences that are important to learn, especially for beginners. In short, the instructions and information given in the Docker image are utilized in creating a robust container. Also, an image can help in building multiple containers.

Moreover, keep in mind that all Docker Images can have their existence because they’re the primary resource for containers, but a container is required to have an image running for it to function properly.

Therefore, it can be concluded that containers depend on images for running and utilize them for the construction of a run-time environment, but the converse is not true. That’s why it is said that docker images govern and shape containers.

From Dockerfile to Container

The lifecycle of a running Docker Container starts from a Dockerfile that is used to create Docker Images. These images are later used to create containers. Let’s learn about them in detail.

First of all, the scripting of instructions is done. Its main goal would be to make a useful Docker image. This script is Dockerfile that automatically executes the outlined commands and builds a Docker image based upon the same. The command used for making an Image from Dockerfile is docker build.

The image created is now utilized as a template by which a developer can build the applications. These applications run in isolated environments known as containers. A container has all the dependencies, such as source code, files, and libraries that it fetches from the Docker image. Right after this, the docker create command is used to build a container layer from the image.

After performing all the aforementioned procedures, you’ll be able to launch a container from the Docker image and create and deploy applications easily.

So far, we’ve learned that Docker images are read-only files containing all the essential dependencies and information used for the creation of containers. Containers are just running Docker images created from those templates and both of them are extremely related and work with each other to make the powerful Docker platform.

The blog also contains information regarding their key differences and a head-to-head comparison table. Moreover, the lifecycle of containers refers to the process of conversion of the Dockerfile to an image and then to a running container. Learning all this information will help you to work better with Docker and build robust applications. All the best!