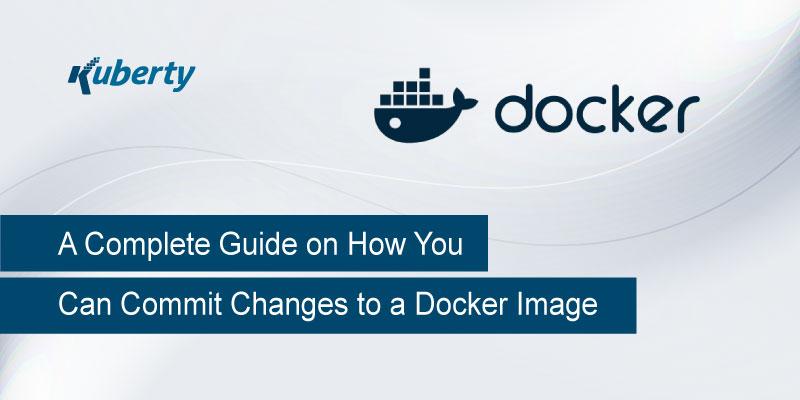 Utilizing an efficient and agile tool like Docker empowers your company’s virtual presence. Clearly, Docker has become a powerful method for making business applications more flexible. Using Docker, you can run an application from one computing environment to another lightning-fast. Creating a dedicated Docker container image makes the process of running an application better. This is because such an image contains everything necessary to run an application quickly. Furthermore, Docker images become containers during the runtime of a specific application.

What is the Procedure for making changes to a Docker image?

Prerequisites that are Mandatory

Main Steps of Committing Changes to a Docker Image

Step 1: How do you pull a Docker image?

This step highlights the process of pulling a docker image. It’s not possible to work with a Docker image unless you have one. Anyway, there are two different commands that help you do so.

If you’re using Ubuntu, this command will take you to the Docker library to download a Docker image: sudo docker pull ubuntu.

As you intend to re-check the available images, you are supposed to this output: sudo docker images. You should copy the Image ID because it will come to use later.

However, if you’re using any other OS, input the following command to pull the Docker image from Docker’s official library-

Step 2: Deployment of the Docker image

Once you’re done with the downloading process of the Docker image, it’s time to deploy the container. How to do that? Let’s check out-

For Ubuntu, you need to add the image ID to the command so that a container gets created based on your Docker image. As you execute this command, you get access to a shell prompt to work inside the container. Want to know how it works? The following example is for you-

For other Operating systems, the container needs to be deployed properly so that the user can access the associated bash prompt. That’s how the user can work inside the container. A command like this does the job-

Step 3: Modification of the container

For Ubuntu, installing the Nmap software is the best way to modify an installed Docker image. To download the software, the following command comes in handy: apt-get install nmap

As the download gets completed, the nmap –version command helps you verify your download. When the output shows that you have installed Nmap version 7.60, you’re good to go.

As you’re done with this, you can exit the terminal using the exit command. After that, execute the following command so that your system shows you the list of deployed containers-

Don’t forget to copy the container ID because that’s necessary to make changes to the existing Docker image.

In the case of other operating systems, when you download a Docker image with the help of Nginx, you get the container ID right after inputting the command.

The first four digits of the container ID is useful to modify your container when you’re doing it with Nginx. So, the command looks something like this- docker exec -it b1d5 bash

Step 4: How to commit the changes?

Type in this command to commit changes to your existing Docker image and create a new one;

Here, the container ID is-<strong>deddd39fa163</strong> and the new image’s name is- <strong>ubuntu-nmap</strong>.

Congratulations! You’re done. Now verify the changes you have made by inputting this command: sudo docker images

This command will show up the list of local images where you can find the new image you just created.

When you’re using other operating systems apart from Ubuntu, you need to install some additional tools. Specifically, you must install nano, MySQL, PHP, and build-essential. Make sure you update apt with this command first: apt-get update.

Now, use the following commands to install the necessary tools-

Once you’re done, input the Exit command to exit from the window.

Now, you are all set to commit changes to the image. The new image will be a moderated version that includes all the changes you’ve made to the old one. Use this command to create the new image-

It generally takes around 30 seconds to complete the task, and generate a new Docker image. You can deploy a new container with the new image. To do so, execute the following command-

That’s all. You have committed changes to your Docker image successfully.

In this article, we have discussed the procedure to commit changes to Docker images on Ubuntu and other systems. As you have seen, the process doesn’t demand heavy technical knowledge. As long as you are familiar with the basics of coding and development, committing changes to a Docker image shouldn’t be difficult for you.

We discussed every step in the article in the simplest way with examples to make the process easier for you. Now it’s time to put your knowledge to work. Once again, follow the above procedures and commit the necessary changes to the Docker image. It goes without saying that it will help your business application become better over time. Therefore, prior to hiring a professional by paying specific remuneration, try doing it yourself.