What is Puppet in DevOps?

Home / DevOps / What is Puppet in DevOps? 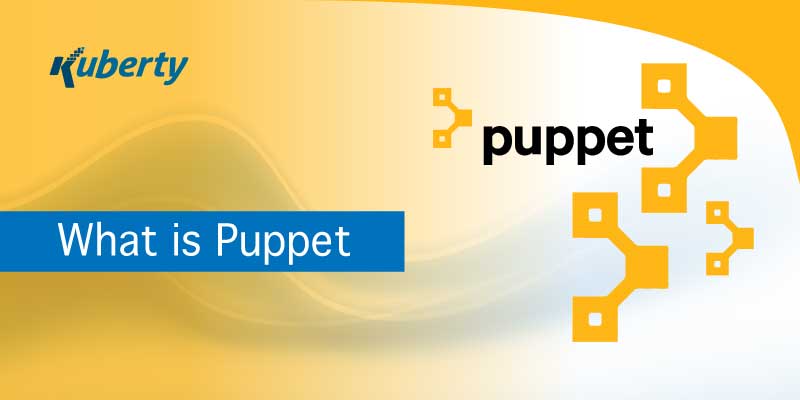 What is Puppet in DevOps?

If you have come across a system administrator, you will know that they always complain that most of their time is wasted in checking the configuration of the servers. If any setting changes and the developers or programmers face any issue, it halts the work and slows down the entire process.

You must have heard about Puppet recently. With Puppet, DevOps found a way to automate system configuration. As you learn more about it, you will understand how perfectly it fulfills its function.

In the competitive environment, the success of an organization depends on how fast it can deliver value to its customers. Puppet plays a major role in this process as it automates time-consuming processes and functions.

In this guide, you will learn everything about Puppet, i.e., what is Puppet, what it does, how it is useful, etc.

What Is the Puppet?

Once upon a time, i.e., a few years back, the system administrators managed system configurations manually. System administrators could perform configuration settings manually if the operations were small and there were few servers. However, for large organizations, it was a lot more work. There was therefore a strong need to automate this process.

Then came Puppet, a configuration management tool that has made DevOps more than happy. Configuration management includes the management of the physical and functional attributes, the operational information, the design, and the requirements of a product throughout its life cycle. An administration team can save thousands of working hours by using this system management and deployment tool. With this tool, configuration tasks can be carried out simultaneously across multiple servers.

Say you have 1000 application servers. Imagine the time it will require to make configuration settings, maintaining, and managing these servers. Puppet undertakes this responsibility and configures the servers to predefined configurations set by the user. It controls the infrastructure, and configurations and policies are defined in codes. Thus it uses Infrastructure as a code that is carried out on each server.

Puppet is free, as it is open-source, but, of course, a commercial version is also available.

Puppet Inc owns Puppet. Like Kanies designed it in 2005. Earlier it was built as cross-platform software. The Puppet Enterprise was the primary product designed by Kanies to assist the DevOps team during the entire SDLC. Both Linux and Windows servers use Puppet today.

Do you know, almost 42 percent of all the organizations that use DevOps use Puppet? Even companies like Microsoft and IBM are Puppet users.

How does Puppet Work?

You must be wondering now that you know it’s a configuration management tool, but how does it work? The answer is here.

Puppet is written in a declarative Domain-specific language which is like Ruby. This language is used to write codes depending on the environment. It manages configurations separately for Unix and Windows environments.

The entire operation is carried out by the Puppet Master system, which collects the information about systems using a utility called Factor and stores it in Puppet manifest. You must know that Puppet capitalizes on client-server architecture very efficiently.

The nodes that run the Puppet Software are termed Puppet Agent. These agents have the most privileges to change the system settings to apply the configuration changes. These agents work for the master and send all the information to Master, who then decides how to configure each server. The predefined configuration settings are then dictated to the Puppet Agents, who then configure themselves.

In simple words, all the servers are connected to a server or Puppet master via software. Then they upload the data about themselves, i.e., Puppet Agents, and the system tells them what configuration is ideal for them. These servers then install the pre-defined configuration on themselves.

In this way, the entire operation is carried out flawlessly by computers themselves. The process is overlooked by Puppet, which works on the master itself and performs various functions that include ensuring that the operation is not compromised. To ensure this, the master and agent use an SSL certificate and TLC protocol. It allows the master and agent to authenticate to each other and restrict interference or eavesdropping.

Why use the Puppet?

As it was said earlier, Puppet uses a code to configure servers. Most organizations use it as it is easy to write usable codes, even the complex ones, using different profiles and roles. The Puppet codes are divided into three roles-

It may look complex but it is cakewalk, and it is easier to make changes later on.

There are several benefits that organizations derive from using Puppet.

As the entire process is automated and numerous servers are configured simultaneously, it decreases the configuration time to a great extent.

Manually, it is quite difficult to maintain and manage the configuration of thousands of servers. But with Puppet, you can reach numerous servers in a short time. It is a boon for large organizations.

Puppet is available in both free and commercial versions. Using a free version, the organization can automate its configuration at zero cot.

Puppet uses a hierarchical design of writing codes which is quite simpler than other complex applications.

Puppet manages the system through the entire software development life cycle by automating the operations and using its continuous deployment tools.

In a world where even the smallest of the operations are being automated, DevOps are not supposed to stick with old ways of operations. Every day new software applications are launched. Customers expect a shorter delivery time. They are the king. It becomes an organization’s responsibility to fulfill customer expectations.

Puppet plays a major role in it as it works on a continuous delivery model, assisting the DevOps teams to reduce cycle time and work simultaneously without waiting for handoffs and waiting for the configurations to complete.

In this guide, you’ve learned about what Puppet is, how it came into existence, what it does, how it works, why companies use it, etc. You learned how automation can save hundreds of working hours that were earlier wasted on redundant manual work. This is a beneficial tool. Try it within your organization, and you will learn more about its benefits.