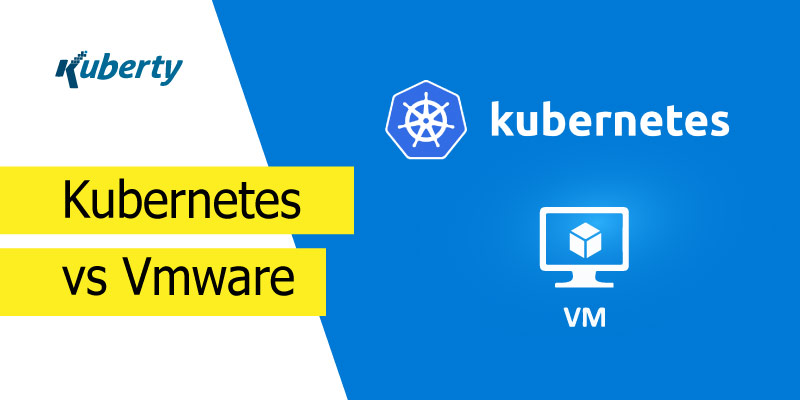 Kubernetes is an open-source software primarily developed for deploying, managing, and scaling containers. It is used to expose an application on a set of pods while assigning a name and unique IP address to them and carries out functions like web processing, image processing, etc.

Whereas, Vmware creates virtualization and cloud computing software. The software creates an abstract layer on computer hardware that divides different hardware elements like processors, storage, memory, etc. into several virtual computers, which are generally known as virtual machines (VMs). Each virtual machine has its own operating system and works like an independent computer system.

Kubernetes service is a logical abstraction on a group of pods on a cluster and facilitates deploying, managing, and scaling of containerized applications.

Several applications are developed using containers that consist of dependencies and configurations. These containers are managed by Kubernetes service.

Kubernetes pods are built to match the state of a cluster and are temporary in nature. Each pod is given an IP address, however, in deployment, a group of pods running at a specific time can be different from the one running later.

Virtualization allows more efficient use of computer hardware and enables a higher return on investment when it comes to an organization’s hardware. It also facilitates public or private cloud providers to serve a large number of users with their limited computer hardware.

VMware has become an important part of several firms’ IT infrastructure. Virtual machines are a basic unit of VMware virtualization. When computer hardware is represented virtually, it can be called a Virtual Machine, whereas the operating system running on it is called a guest operating system.

Each virtual machine has a configuration file that consists of its settings, a log file to keep a track of its activities, a virtual disk file – soft copy of your hard drive, along with hardware modifications, system failures, migrations of one VM to another as well as its status.

VMs provide several tools to manage the above-mentioned files. The settings of VMs can be easily configured with the vSphere Client – a program to manage virtual machines. vSphere web services software is also used for configuring virtual machines through other programs.

Kubernetes service is essential to facilitate the smooth functioning of containerized applications. It allows the deployment and scheduling of containers along with scaling them to the desired state.

Here are the main benefits of Kubernetes service:

Kubernetes service defines containerized applications while deploying them in a set of servers or clusters. Kubernetes also keeps a check on the container’s health while monitoring them regularly.

Container applications get lightweight and easily relocatable while running on Kubernetes because they are separated from their infrastructure. It facilitates easy shifting from local machines to production amidst different cloud environments while keeping the containers consistent.

A large community of firms and developers create extensions as well as plugins that help in managing, monitoring, and securing Kubernetes.

VMware products and services offer few important benefits such as:

VMware allows better usage of all the physical resources of a computer system. Administrators do not prefer to run several mission-critical applications on one server OS. The OS can become unstable even if just one application breaks down while crashing other applications too. To avoid this, the user can run each application in a separate virtual OS and on its own server.

VMware is the most popular and reliable firm offering virtualization services with a customer base of around 5,00,000 customers. Besides, it has a network of around 75,000 partners offering customer support with a huge variety of additional products and services.

3. Efficient use of space and energy

VMware allows running more applications using fewer servers. The benefit of using a limited number of servers is that there will be less requirement of space in your data center along with less power consumption.

A hypervisor is a layer of software interacting with the underlying elements of a computer and allocates those elements to the OS. The computer is called the host, whereas the operating systems are called guests. The guest OS asks for resources from the hypervisor.

The hypervisor is responsible for separating each guest OS, so they run without interfering with each other. In this way, the performance of each operating system that runs on the host is prevented from being compromised in case any of the guest OS crashes.

A data center-focused hypervisor replaces the primary OS of a computer which interacts with the hardware. VMware has succeeded ESX, which was a bigger hypervisor, and utilized most of the resources of the host computer. ESX has been discontinued by VMware.

What is Desktop Virtualization & How is it Related to VMware?

VMware is a server-based hypervisor. It also sells software that virtualizes desktop Operating Systems. Let us know more about VMware in detail.

It has two types:

How to Install VMware Tools

Having a second OS that can exchange data with the first operating system seems like an advantage. This is where VMware tools play a vital role as it allows the guest OS that runs in the Type 2 hypervisor to work more efficiently with the host OS.

The two main advantages of using VMware tools are that it allows graphics to perform faster as well as supports shared folders between the host and guest OS. A user can cut and paste files across different operating systems.

If you wish to install VMware tools, follow these steps:

Step 2- Then VMware Workstation launches a virtual CD-ROM drive in the guest operating system, which consists of the VMware Tools installer.

Step 3– Now, you can see the CD-ROM image in the guest OS while being able to run the installer.

Kubernetes is an open-source platform specially designed for managing and scaling containerized applications. It is responsible for the scheduling of nodes in a cluster and also manages workloads to match their actual state with the desired state. On the other hand, VMware has been one of the leading virtualization platforms that allow optimal usage of computer hardware.

Here we’ve created a comparison table, have a look:

If we talk about the drawbacks, Kubernetes has many disadvantages when compared to VMware, such as poor workflow, steep learning, requirements for huge resources, etc. While VMware only has one drawback that it’s quite expensive.

Now you’ve learned all about the utilities of Kubernetes and VMware. It’s time to decide which one to choose according to your requirements. If you have further queries, drop a comment in the below box. Stay connected for more guides.