How to Install Jenkins on Kubernetes?

Home / Kubernetes / How to Install Jenkins on Kubernetes? 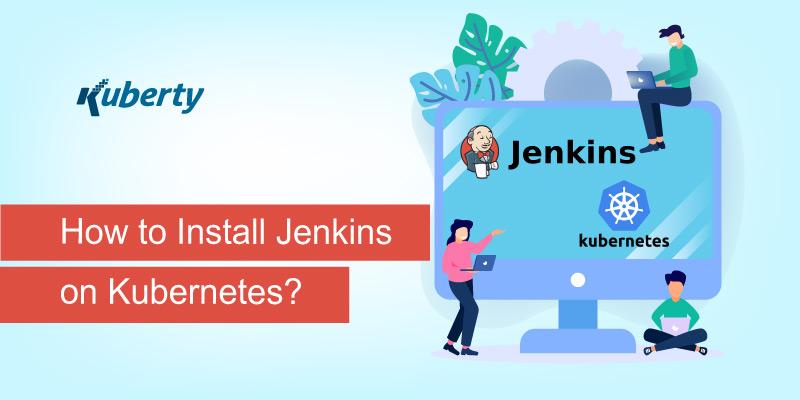 How to Install Jenkins on Kubernetes?

If we look from a developer’s point of view, it is hard to ignore the significance of Continuous Integration/Continuous Deployment (CI/CD) pipelines, which are considered one of the core components to automate your software delivery process. This component plays a significant role in streamlining the entire workflow for different teams and thus further helps increase their productivity.

The pipeline helps create code, runs tests (CI), and enables the deployment of a new version of the application. Regular involvement of Continuous Integration/Continuous Deployment (CI/CD) is crucial to integrate the code with a shared repository numerous times.

Jenkins is a widely-used open source automation server that assists in setting up CI/CD pipelines. However, it is proved that to provide a new automation layer to Jenkins, the Kubernetes cluster is very important. With the help of Kubernetes, it becomes possible to use resources and servers effectively, and also the underlying infrastructure can be managed without putting any extra load.

The need to build the CD (continuous delivery) pipeline and setting up Jenkins via the Kubernetes engine offers the foremost benefits as compared to standard VM-based deployment that is as follows:

In this write-up, you will get familiar with the entire procedure of installing Jenkins on Kubernetes.

Steps to Install Jenkins on Kubernetes

Before discussing the steps, you need to take note of the prerequisites for installing Jenkins on Kubernetes:

To set up Jenkins, you would require to create:

Now to set up an environment for Jenkins, Kubernetes has an API, and you can get across the desired state by using either a YAML or JSON file. However, in such a case, it is wise to use the YAML file to launch Jenkins. And, be sure about the kubectl commands before you use them to manage the clusters.

First, use the following kubectl command to create the Jenkins namespace:

Further, to deploy Jenkins, you must build a new YAML file.

Create a new file named jenkins.yaml and open it with the help of nano or your preferred editor.

Now, the next thing that you need to do is to add the following code and define the Jenkins image, in addition to its port, and several more configurations:

NOTE: As you see in this step, we have created a deployment by making use of the Jenkins LTS image and have opened ports 8080 and 50000. These ports give access to Jenkins.

Step 2: Creation of next deployment in the Jenkins namespace

Ensure you provide adequate time for the cluster to pull the Jenkins image and get the Jenkins pod running. The command you need to provide is kubectl, as it helps in verifying the pod’s state.

The output appears similar to this:

There will be a difference in the pod name, and in the process of its running; just ensure to expose it using a Service. In this command, the NodePort Service type will be used. Also, there is a need to create a ClusterIP type service to connect to Jenkins.

Launch the new file after creating it as Jenkins-service.yaml:

Now, the most vital step is to add the following code and then try to define the NodePort Service:

NOTE: In the following YAML file, we have defined NodePort Service and then exposed port 8080 of the Jenkins pod right to port 30000.

Now, finally, we are going to create the Service in a similar namespace:

Here is the command to verify if the Service is running or not:

In this step, let us try to get familiar with the procedure for exploring the Jenkins UI. You must learn about the Nodeport service and its availability in getting the TCP port 30000 with the cluster nodes. However, it is a difficult task to get a node IP for gaining exact access to the Jenkins UI. Using kubectl commands to retrieve node IPs is the fastest and accurate way, here is how to-

kubectl will produce an output with your external IPs:

NOTE: Copy any one of external_ip values, then open a web browser, and navigate to http://your_external_ip:30000. As you do so, a page will appear asking for an administrator password.

You require to use kubectl and pull the password from those logs.

First, return to your terminal and retrieve your Pod name with the following command:

The output will appear as shown below:

As you can see here, you must examine the pod’s logs for the admin password. Now, all that you require to do is just substitute the highlighted section just with your pod name by using the following command:

As you scroll up or down, you will find the password:

Jenkins initial setup is required. An admin user has been created and a password generated.

Please use the following password to proceed to installation:

This may also be found at: /var/jenkins_home/secrets/initialAdminPassword

Finally, you need to copy your_jenkins_password and then go to your browser and paste it into the Jenkins UI. As you enter the password, Jenkins will quickly direct you to install the plugins.

Once the installation process gets completed, Jenkins will load a new page, and then you would be required to create an admin user. While creating the Admin user, just ensure to enter all essential details in the given fields, or you may also skip this step by pressing the skip and continue as admin link. However, by default, your username will be taken as admin and your password as your_jenkins_password.

Moving ahead, the following screen will ask for instance configuration, and then you are required to click the Not now link and continue.

Click on start using Jenkins, and in a matter of a few seconds, the Jenkins home page will appear.

Jenkins finally created pipelines. In this step, we will create one of Jenkins’ sample pipelines.

As you see the Jenkins home page, click on the New item link displayed on the left-hand menu.

As a new page opens up, select pipeline and then press OK.

Jenkins will take you to the pipeline’s configuration, you need to press the Ok button. Look for the Pipeline section and then search for Hello World from the try sample pipeline dropdown menu, which is on the right-hand side.

After selecting the Hello World, click the Save button.

Jenkins will lead you to the main page of the pipeline where you have to enter the Build Now option that could be on the left-hand menu. The moment you click on Build Now, the pipeline begins to run.

Also, make sure you do not forget to examine the console output and look at what happened when the pipeline was running.

We’ve reached the final section of our guide. You already have learned to install and configure Jenkins on a Kubernetes cluster. Let us not forget that Jenkins has got a repository of plugins; using those plugins makes it possible to carry out complex operations. And the kubectl command-line tool will help you to perform these tasks easily. Always remember to double ensure the commands before you deploy it. If you have any more queries regarding the same, drop a comment in the below box. Stay connected for more guides.

How to Install Jenkins on Kubernetes?Kubernetes