How to Become a DevOps Engineer?

Home / DevOps / How to Become a DevOps Engineer? 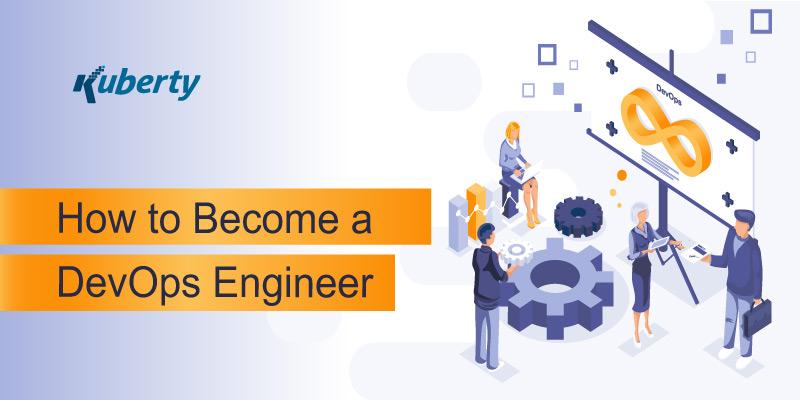 How to Become a DevOps Engineer?

In this article, we will learn about DevOps methodology, the role of a DevOps engineer, the required skill set, and various tools used by them.

DevOps is a strategy or methodology that is used for the development of software. It helps in bridging the gap between the developers and the IT teams working together within the same project. It boosts up the collaboration of both teams to improve the working capabilities of both teams.

DevOps engineers should be able to understand the entire concept of the software development lifecycle (SDLC) and the various tools used in automating the tasks to develop continuous integration/ continuous delivery pipelines. They work closely with the developers and IT staff to monitor the software releases. DevOps engineers can be developers who are able to code, deploy, and have knowledge of network-related operations or can be system administrators who focus on testing the codes.

Explain the role of DevOps Engineer

Before moving further, it is crucial that you understand the role of a DevOps engineer and in what field they can start their career. Basically, a DevOps engineer can be both a developer or belong to the IT team.

Tasks and duties of a DevOps engineer

Below we have mentioned some of the tasks and responsibilities of a DevOps engineer.

For effective working and enhanced productivity, the following skills are key for DevOps engineers.

Having knowledge of advanced coding might not be necessary for a DevOps engineer but it will help you to get along. But if you have knowledge of programming languages like Java, Python, etc. will help you to get into a DevOps engineer role easily. If you are good at coding then you will be able to save time, cost, and effort by optimizing the code, debugging the code, fixing deployment errors, and simplifying the development lifecycle.

Some processes in a DevOps environment like provisioning of the server, installing and configuring the required application, are automated. DevOps engineers are somehow responsible to keep these things running seamlessly. Thus they require strong coding skills to build and operate tools that will automate the DevOps process.

Virtualization refers to the abstraction of computer systems from their physical components, allowing them to run on layers independent of the physical hardware. Virtualization breaks down the large systems by partitioning them into smaller systems, and allows multiple users or applications to use a server. Virtualization is considered to be an important part of DevOps. By virtualizing the hardware and cloning the existing systems, the development teams, IT and testing teams can work more closely for more effective results. It helps in making it possible to provision standardized environments specific for dev, test, and production systems.

Virtualization works as a core mechanism behind various clouds like public, private and hybrid clouds. A hybrid cloud is a commonly used configuration that helps in integrating the internal data centers and public cloud resources. If you virtualize the computing resources, it will handle the transition efficiently from the data center to the cloud

Among various available DevOps automation tools, the most commonly used DevOps tools are Puppet, Kubernetes, etc. The DevOps process can be automated from code generation to build, test, and deployment. Even the testing is also automated with the right set of tools that will provide continuous feedback to development teams.

Considering the agile work process, organizations used to follow a step-by-step iterative process for developing applications along with a consistent link between test and development. DevOps is a one step ahead of it. Testers are not only limited to checking the functionality is working properly, but also required to test various operations, performance, security, and many other aspects of the development cycle.

Testing can be done at every stage of the software development lifecycle, from the very beginning like from planning through to coding phase and till the deployment phase.

Tools used by a DevOps Engineer

A DevOps engineer uses various advanced tools for efficient working and improving productivity. Here, we have mentioned some of the most commonly used tools in various categories.

In today’s digital enterprise, DevOps engineers play a major part. In this article, we have highlighted the main roles and responsibilities of a DevOps engineer, along with the knowledge of CI/CD pipelines, maintaining cloud infrastructure, monitoring and configuration management, and other technical skills that should be required for the position. To become a DevOps engineer, you need to go through this guide and master your choice of language, platform, and tools.

Being a DevOps engineer is a challenging position. However, it is one of the highly paid jobs available. It will lead you to more promising career roles like DevOps team leader, head of infrastructure, head of IT, etc.